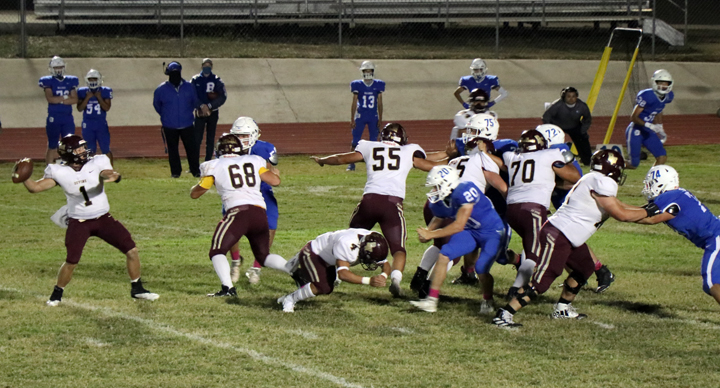 So much for the “Hondo Hangover.” After losing to Hondo a week prior, Devine bounced back in a big way last Friday with a 63-0 mauling of the Bulldogs in Bandera. Six Warhorses combined to score nine total touchdowns for Devine on the night. The Horses are now 6-2 overall and 2-1 in District 15 4A DII action.
In a game that was never even really a ballgame, Head Coach Paul Gomez simply said that his team “executed well and did what we had to do.”
What the Horses did was jump out to a 27-point first quarter and never looked back. In games like these, the most important thing is to get everyone quality playing time and to get out of the game injury-free. It appeared Devine did just that.
“It was a good game because our back up players played the whole second half. Those guys practice just as hard as the starters so it was good for them to get significant playing time,” Gomez continued.
Hayden DuBose and Marcos Rodriguez had the opportunity to get twelve carries between them and combined for 197 yards and three touchdowns.
Starters Brady Hackebeil and Buddy Santos racked up 308 yards between them on only 11 carries. Their 28 combined yards per carry tells you all you need to know about Bandera’s run defense.
Game flow
After the Warhorse defense gave up one of only five Bandera first downs on the Bulldogs first possession, Devine forced a punt after three more plays.
Buddy Santos took the Warhorse’s first play from scrimmage 48 yards for the score. The extra point attempt was no good, but Devine led 6-0 with 8:31 to go in the first quarter.
Devine’s defense continued to dominate forcing another Bulldog punt.
Quarterback Brady Hackebeil cut out the middleman and raced 78-yards for Devine’s second touchdown. Buddy converted the two-point run to push the Warhorse lead to 14 with 5:32 left in the opening quarter.
Justin Contreras scored his only touchdown on the night with a 9-yard run with 1:50 on the first period clock. Xsavior Martinez booted his first of five extra points to increase Devine’s lead to 21-0.
Hackebeil scored up the left side from 53-yards out and thirty-three seconds still to go in first quarter 27-point score-fest.
Bandera’s quarterback went in reverse on the Bulldogs next possession running out of bounds at their own one-yard line. Forced to punt out of the back of their own end zone the Bandera punter simply stepped out of bounds to give Devine the two-point safety and a 29-0 lead.
A 24-yard Buddy Santos run and a 9-yard Marcus Rodriguez run accounted for Devine’s two, second quarter touchdowns and their 43-0 halftime lead.
Hayden DuBose flexed some speed in the second half as the backup running back scored on runs of 55 and 78-yards. Sandwiched between the DuBose touchdowns was Nate Ramirez’s 17-yard scamper with 4:18 left in the third.
AAE coach speak
I needed a little more fluff to make what for me is a short article just a little longer. Thanks to “Always Available Eads”, my need was met.
Kidding aside, linebacker coach Evan Eads was more than please with what he got from his defensive players.
“The Linebackers had a good night for stats against Bandera,” said Eads. “Peyton Carr had his first night of solid action after coming back from an injury and he had some hard, loud hits. The coaches are excited about Peyton and what he adds to our defense.”
Eads is not shy about his expectations for his guys against the Mavericks Friday.
“We know we have to have a great game against Pearsall. The offense they run demands disciplined reads and aggressive paths, and these linebackers have been getting better and better every week in that category,” Eads said confidently.
As for Eads’s slot backs, the wealth was shared frequently among a large number of possible Warhorse ball carriers.
“The offense was rolling because of how well our line was winning battles. Justin had a touchdown. Nate Ramirez had a touchdown. Ethan Santos, Aiden Zapata, and Gus Puente all got a few carries. Having so many quality slots is a good problem to have,” Eads finished saying.
Up next
Devine takes on the visiting Pearsall Mavericks Friday night at Warhorse Stadium. Kickoff is set for 7:30pm.
By Jerel Beaty
Staff Writer