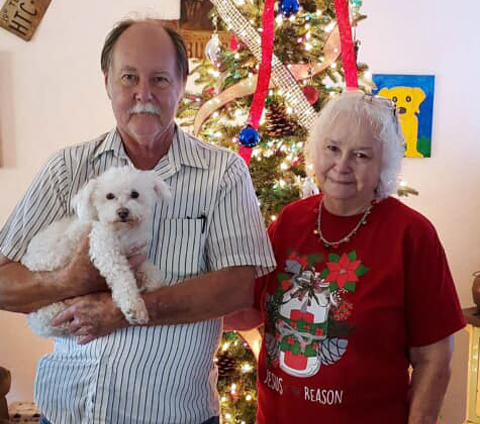 The community of Natalia is in shock as they mourn the loss of two beloved Medina County residents, Kay, 70, and Roger Jackel, 68, who were taken from this earth in a tragic and senseless act this past week. Medina County Sheriff’s Deputies responded to 181 CR 6816 around 10:37 am this past Tuesday morning, March 1, where they sadly found the couple deceased at their home.
“I have no words,” said Sheriff Randy Brown when asked for a comment. “Two decent people’s lives were taken for no reason. We will continue to work hard to make sure their killer gets exactly what he deserves. My heart is broken for this family.”
On March 4th, the Medina County Sheriff’s Department stated, “Investigators secured an arrest warrant for the biological son of the deceased female for Capital Murder. Suspect Jeffery O’Marah was located in Tennessee driving his deceased step-father’s stolen pickup truck. Medina County Investigators traveled to Linden, TN to collect other evidence and interview O’Marah.”
According to the sheriff, Jeffery O’Marah will be extradited back to the Medina County Jail, where the suspect will sit charged with the murders of his mother and step-father.
While many hearts are broken upon the news, one thing is clear, Mr. and Mrs. Jackel touched many lives in our communities and many of those people are lifting them up in prayer today.
Mrs. Jackel was a beloved local school teacher at Natalia Junior High for 17 years, and Mr. Jackel worked at the rail yards in Hondo, and both were active in area churches.
They have impacted so many in their lifetimes, and here are just a few comments about what an impact they had on those many people:
“Kay and Roger loved the Lord Jesus Christ and loved people. Roger loved teaching kids and made a positive impact on many lives at Pearsall Rd Baptist Church. I’ve never met anyone more loving than Kay. They both had generous spirits and love defined their lives. Family was their world. Gary and I are heartbroken at the loss of our dear precious friends,” said friend Natalia Sprague.
“Kay touched countless lives during her time in Natalia ISD. Her and her husband were very nice folks in our community and they will be deeply missed,” said another friend and fellow Mustang Eric Smith.
“Kay was the best grandmother…not only to her own, but to those kids she came into contact with. She made things special for people she loved; photo albums, invitations, shadow boxes and much more. Roger was a kind man that could make beautiful wood furniture. He was talented and shared his quality craftsmanship with the community. They were the type of people who gave and expected nothing in return,” said Kara Navarro.
Services are under the direction of Hondo Funeral Home.
A visitation will be held at 10:00 a.m. to 11:00 a.m., followed by the funeral service at 11:00 a.m. on Wednesday, March 16, 2022, at the First Baptist Church of Devine.
The Jackels also dearly loved their pets, and in lieu of flowers, the family requests that donations be made to the Texas Chihuahua Rescue: https://texaschihuahuarescue.org/