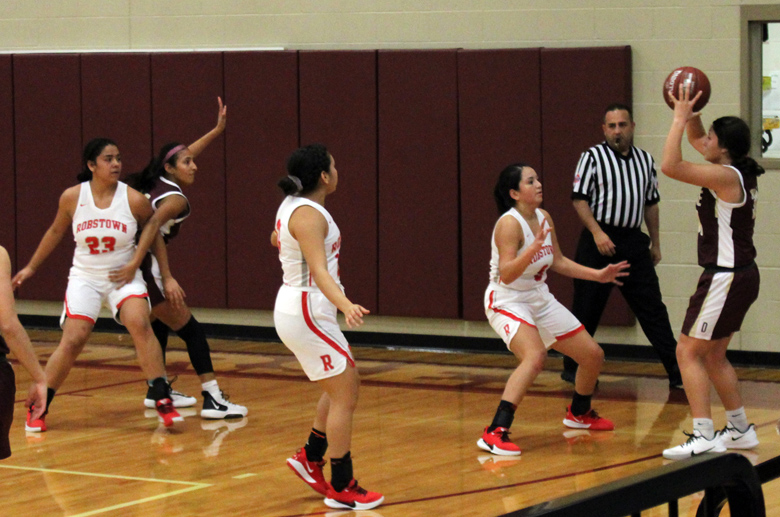 As of December 23rd, the Devine Arabians are now ranked #16 in Texas according to TABC in 4A schools. With a 17-3 record, the Arabians won their last two games against Jourdanton and Boerne.
Jourdanton
The Arabians hosted Jourdanton on December 17th and crushed the Squaws 65-35.
“The girls shot the ball well in the Jourdanton game,” Coach Jim Sessions said. “We got off to a quick start in the first quarter scoring 19 points. We did a good job of scoring in transition and getting the ball inside to score in the first quarter. We did a great job of taking care of the ball that quarter as well. We added another good quarter in the 2nd. We maintained our pace and went to the half with a nice lead.
“In the second half, we came out of the locker room and continued with the good shooting. We moved the ball well on the night totaling 12 assists for the game. We did a great job on the boards as well, winning the rebounding battle. It was a great team win.”
Points: Lacey Shook 5, Macey Hein 10, Yessika Garza 4, Megan Runyan 4, Maddie Mata 8, Clarissa Zamora 16, Ally Taylor 18. Rebounds: Shook 1, Hein 2, Garza 3, Runyan 5, Mata 5, Zamora 7, Taylor 3. Assists: Shook 2, Hein 4, Garza 1, Runyan 2, Mata 2, Taylor 1. Steals: Gabby Rodriguez 1, Shook 1, Hein 7, Garza 3, Runyan 1, Mata 2, Taylor 1. Blocks: Rodriguez 1, Mata 1. Q1 19-9, Q2 32-21, Q3 48-31, Q4 65-35. FTP 57%.
Boerne
The Arabians had a tough game against Boerne on Friday. They battled for the lead for the lead and came out on top in the very end. They beat Boerne 37-35.
“We picked up a game vs Boerne before the break,” Sessions said. “We were originally scheduled to play them on Dec 31st, but there was a scheduling error and we had to move the game to Friday. It was a tough, physical game. Boerne plays with a high energy level and with a lot of intensity. This was a close game throughout.
“The first half was fast paced and Boerne tried to make it chaotic with their defensive pressure. We did a really good job of playing with patience and moving the ball despite the crazy pace. We got some great looks, but we didn’t shoot the ball at a good percentage. Defensively we played with a good intensity, but we were not real solid and we allowed Boerne to get to the line a little too often. We talked about these things at halftime and the girls did a really good job of making adjustments in the second half.
“We had a really good start to the 3rd quarter which allowed us to extend the lead early in the quarter. We got into foul trouble and Boerne made a run at us at the end of the 3rd. In the 4th quarter, we got a lead late in the quarter when we made a big 3 pointer. We were able to hold on to the lead to come away with a hard fought 2- point win.
“We didn’t shoot it great in this game, but in the end we found a way to win. I was proud of the way the girls fought through some adversity to come away with the win.”
Points: Mata 9, Shook 4, Hein 3, Garza 3, Runyan 3, Taylor 8. Rebounds: Mata 6, Shook 2, Hein 7, Brianna Bowyer 1, Garza 2, Runyan 5, Kadence Yeats 1, Taylor 3. Steals: Mata 3, Rodriguez 2, Shook 2, Hein 1, Yeats 1, Taylor 2. Assists: Mata 3, Shook 2, Hein 4, Taylor 1. Q1 7-6, Q2 21-20, Q3 33-31, Q4 31-35. FTP 50%.
The Arabians will be back when they face Fredericksburg on January 3rd and then district starts against Hondo on January 10th.
By Dicy Chambers
Sports Writer