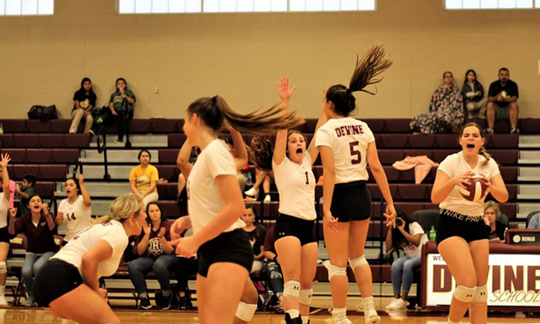 In their second district game of the season, the Arabians won at home on October 1st against Crystal City. Having played on the road for nearly a month, the Arabians felt the power of the home court in this game. Crystal City did not go down easily and Devine worked hard to stay ahead of their offensive charge. They won 25-20, 25-20, 25-23 to increase their district record to 2-0.
“This was a great win, especially since we haven’t played at home in almost a month,” Coach Leigh Anne McIver said. “We did some great things tonight but also had some moments where we made too many errors in a row. Our blockers really stepped up tonight and got lots of blocks and touches on the ball which really helped our defense.”
Kills: Megan Runyan 9, Bailey Oropeza 6, Janaee Wofford 9, Madison Pike 9, Jasmine Pompa 2. Aces: Alliston Stevens 2, Myla Miles 2, Macey Hein 2, Aleyna Gerlach 1, Wofford 1. Blocks: Runyan 1, Pike 3. Digs: Stevens 6, Runyan 7, Miles 5, Oropeza 4, Gabby Rodriguez 16, Hein 8, Wofford 15, Destiny Moralez 3, Pike 3, Pompa 4.
The Arabians faced Pearsall last night and will play Hondo for the first time in district this Friday night. Hondo is 2-0 in district as well after beating Crystal City 3-0 and Pearsall 3-0. With the Varsity playing at 5:00 pm, get there early to support the Arabians and then head to the football field to watch the Warhorses battle Hondo at 7:30 pm.
District standings as of Monday, Oct. 7th: Devine 2-0, Hondo 2-0, Carrizo Springs 2-1, Pearsall 0-2, Crystal City 0-3.
By Dicy Chambers
Sports Writer