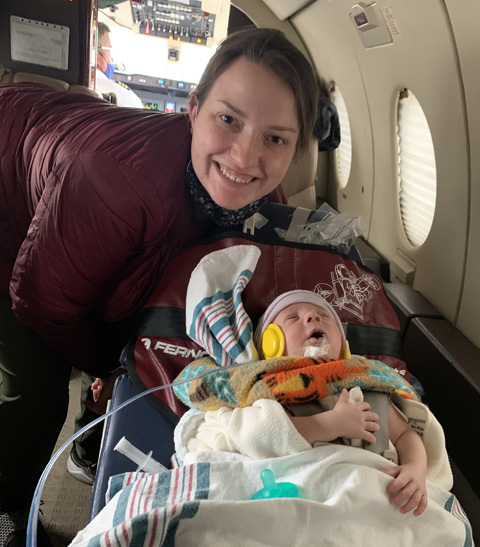 Medina Valley High school sweethearts Bolton and Maycee (Tschirhart) Russell, who now live in Devine, welcomed baby Walton Joseph Russell into the world this past February in an emergency C-section. Weighing in at 5lbs 14 oz and 20 inches long, nurses quickly dried him off and whisked him off to the Newborn ICU, diagnosing him with Esophageal Artesia (a birth defect that makes him unable to pass food from the espophagus into his stomach without a g-tube). Now 6 weeks old, baby Walt and his family have flown across the United States to see Boston doctors who created an innovative new procedure to solve a problem that was not treatable before. The Boston hospital pioneered the procedure and is one of the only hospitals offering this life-changing treatment, where baby Walt will undergo the revolutionary surgical procedure this week.
They were grateful to have made a connection with another local family, who had been down this road before, and told them about Boston’s Children’s Hospital and the Foker Process. 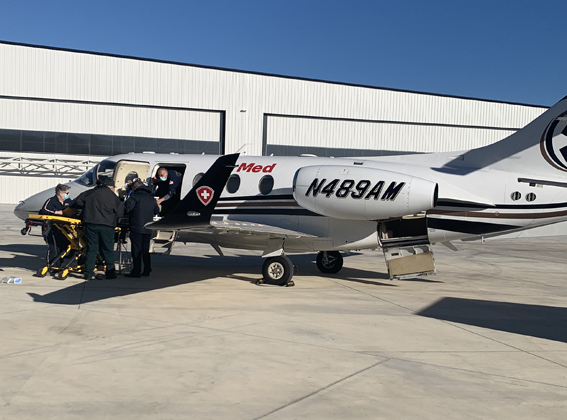 “The same day Walt was born, we were connected to a family from San Antonio whose son had the same condition a few years ago. She was very prompt in telling us to transfer our son to Boston Children’s Hospital Esophageal and Airway Treatment Center, and shared her family’s own experience. At first, we thought ‘no way!’ After some time though, we began our own research. Most surgeons and hospitals only deal with a handful of EA cases a year, even less Type A cases. Boston Children’s Hospital deals with that many cases in a week. Their expertise comes from seeing EA patients every day,” Mrs. Russell said.
“The docs in San Antonio basically just told us to stay in the ICU for 3-6 months and wait and see if the esophagus grows on its own, but after hearing about Dr. Foker, we wanted to take a more proactive approach. I think he did the first surgery something like 20 years ago, but it’s only started to catch on in the past 10 years. A lot of times, doctors just want to stick to what they know and have always done, but the research suggests doing this procedure developed by Dr. Foker will also give Walt a better long term outcome, whereas the traditional wait and see approach usually lead to having to do several reconstructive surgeries in the future. Even the insurance agreed to cover it after speaking with doctors, because the amount of time spent in hospital and overall medical outcome is much better with this revolutionary surgery. I am glad we found this team of doctors. My understanding is only a few hundred patients with long gap esophageal atresia have gotten to do this surgery.”
“Dr Foker at Boston Children’s Hospital pioneered the Foker Process. This technique stimulates growth of the upper and lower ends of the esophagus to treat cases of long-gap esophageal atresia. This technique is a revolutionary procedure that encourages natural growth and strengthening of a child’s existing esophagus, resulting in an esophagus that works so well that it is often nearly indistinguishable from one that developed normally. There are few surgeons who use this technique, and Boston is home to the experts.”
It was towards the end of the pregnancy that doctors first noticed the problem, and explained what it meant for Walt.
“I was then told that there was a strong possibility that our son had a condition called Esophageal Atresia, a birth defect where a part of the baby’s esophagus does not properly form. The esophagus has two separate sections—the upper and lower esophagus—that do not connect. A baby with this birth defect is unable to pass food from the mouth to the stomach, and sometimes has difficulty breathing.”
That possibility was confirmed shortly after Walt made his way into the world.
“That day was a whirlwind of overwhelming information. They were able to confirm he had a form of Esophageal Atresia (EA). The surgeon came to talk to us and said there was a strong possibility that Walt had Type A of EA, or pure EA. This form usually results in a long gap that cannot be connected right away. The surgeon told us that several months of patience were probably in front of us. Their method to treat this was to wait for Walt grow, hoping the esophagus would grow close enough together to connect it through time and bolus feeds through a g-tube,” Mrs. Russell said.
On February 9th, Walt went into the OR for a bronchoscopy and to insert the gtube. This is when it was confirmed he had Type A EA.
“Bolton and I were so overwhelmed with emotion those first couple of days. As a new parent you dream of bringing your first child home, spending those first days snuggling with them and introducing them to family. All of those dreams quickly went out the window for us. We had never heard of this condition before 1 week ago. EA occurs in an estimated 1 in 4100 births in the United States and is often associated with other conditions. Type A occurs in as little as 8% of EA cases. Luckily, no other conditions have been found in Walt’s case,” she added.
As noted, they decided to make the trip to Boston. 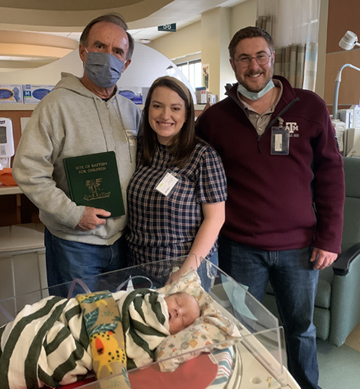 “We felt that if it was possible, we wanted the experts to treat Walt. The more experience they had, the better it made us feel about the long term outcomes as well as getting him home and healthy as soon as possible. Within a few days we were in contact with the program director, Dori. She listened to our story and said that Walt was a perfect candidate to come to Boston. We soon had the ball rolling to start Walt’s transfer. Before he could undergo surgery, he needed to reach 3.5kg (7.7lbs).”
The surgery will begin this week as we go to press.
“On March 18th, Walt and I made the trip via a medical flight to Boston. Bolton met us there after flying commercially. I am not currently working to focus on Walt’s recovery. Bolton works for HEB and will be able to be here in Boston and work remotely. We anticipate that Walt will go through the Foker Process. The first surgery, scheduled for March 23rd, the surgeons will attach sutures to each end of the esophagus and put traction on them. Depending on the method, they will go in every few days to apply more tension. This process helps the esophagus to grow together quicker. This tension process could be a couple of days or a couple of weeks. When the two ends are close enough together, the surgeons will make the repair.”
“Once he is repaired, there will be several tests done to evaluate the repair and any leaks before they begin gtube feeds again. Once they can begin those, we can begin introducing oral feeds. His recovery could be a couple of weeks or months depending on any complications. When he is ready to come home, he will most likely still have a g-tube to supplement oral feeds while he adjusts. Once he is home, he will need physical therapy and speech therapy. We will also watch closely for strictures at the repair site, where the esophagus narrows, that requires dilations to open back up. The ultimate goal is for him to be a happy and healthy kid, eating 100% orally.”
“Both Bolton and I will stay in Boston throughout Walt’s time here. We are staying in a hotel near the hospital. Major costs we are incurring are lodging, food, transportation, and medical treatment costs. Much of that burden has been lifted because of the generosity of our family, friends, community and strangers,” Mrs. Russell said with a grateful heart.”
“We are truly blown away by all of those that have rallied behind us in prayer and support. There has been so many ‘God moments’ throughout Walt’s journey that is a testament to the power of prayer. Prayers are being heard and carrying us through this journey. We can’t wait to get Walt home and introduce him to everyone. We are looking forward to being home as a family,” she adds.
How you can help…
The Russell family is reporting Walt’s progress on a Facebook group, Walking with Walt and caringbridge.org/visit/walton. Contributions towards our journey can be made at:
• gofundme.com/walk-with-walt
• Venmo @Bolton-Russell
• Mail monetary donations to P.O. Box 572, LaCoste, TX 78039
Gift cards and items can be sent directly to the family at the hotel near the Boston hospital where they will be staying for 2-4 months: Bolton and Maycee Russell, c/o Homewood Suites, Room 207, 111 Boylston St., Brookline, MA 02445.
They really appreciate gift cards, while they are living at the hotel for at least two months: Amazon, Whole Foods, Target, UberEats, and Starbucks.
If you are a seamstress or quilter, the family loves having plenty of different blankets for Walt to rotate through, especially because he will be in stages of sedation throughout his 2-4 month recovery. Also small stuffed animals. Dressing him up in baby hats is also fun for Walt since he often can’t wear clothing due to the medical wires and tubes.
Proud Grandparents are: Scott and Teresa (Rihn) Tschirhart of Devine, Mike and Lori Farris of Castroville, Bryn Russell and Christopher Smith of San Antonio; great-grandparents are: The late Denis Rihn and Joyce (Schott) Rihn of LaCoste, Alex and Marian (Ehlinger) Tschirhart of Devine, Darlene Bonham of San Antonio, Suzanne Shirley of Aransas Pass, Pam Russell of Katy, and Claudia Farris of Castroville.

Providing groundbreaking treatment for long-gap esophageal atresia
According to Boston Children’s Hospital–Until recently, esophageal atresia (EA) was a condition with no truly satisfactory treatment options. For a child with long-gap esophageal atresia, the gap between the two “nubs” of the esophagus is too far apart to connect surgically, even with transplanted tissue. The Foker process is a revolutionary procedure that encourages natural growth and strengthening of a child’s existing esophagus, resulting in an esophagus that works so well that is it nearly indistinguishable from one that developed normally. We have the most extensive experience in the world in performing the Foker process, with outcomes data to support its benefits. The Foker process is significantly more effective when used as a first-line treatment for long-gap esophageal atresia compared with secondary long-gap esophageal atresia that has been previously treated elsewhere.
In some children, the ends are so far apart they cannot be easily connected. To solve that problem, John Foker, MD, PhD, developed the technique to stimulate the upper and lower ends of the esophagus to grow so they could be joined together. Using this technique, surgeons place traction sutures in the tiny esophageal ends and increase tension on these sutures daily until the ends are close enough to be sewn together. Boston Children’s Hospital is the only pediatric hospital that offers the Foker process to treat EA and TEF. Foker has worked exclusively with Russell Jennings, MD to ensure that his successes are continued here in Boston. Dr. Foker is now the Scientific Director of the EAT Program and visiting professor at Harvard Medical School.
The following website is for reference on what Walt is going through, should any other families want to look into this revolutionary treatment for Esophageal Artesia:
https://www.childrenshospital.org/conditions-and-treatments/treatments/foker-process
https://www.childrenshospital.org/centers-and-services/programs/a-_-e/esophageal-and-airway-treatment-program