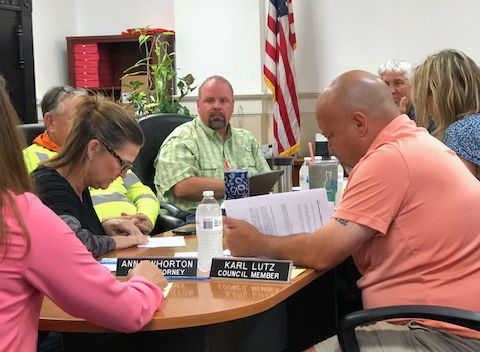 In an effort to avoid the bad publicity and legal pitfalls that have damaged other police departments, the City of La Coste is curbing use of social media by its police personnel.
“We don’t need stupid comments on social media,” Chief Johnny Kendricks told the City Council on Sept. 15. “First Amendment rights are not always guaranteed, depending on what’s being posted.”
The police department does not have its own social media site, but uses the city’s social media network.
Under the new policy, Chief Kendricks will vet all posts submitted by police personnel; City Administrator George Salzman will screen all posts submitted by the department.
Drafted in consultation with City Attorney Anna Whorton, the policy declares that all content on the city’s social media sites is subject to open-government and public-records laws.
As for use of personal and non-official social media sites, the policy states:
“Department personnel are free to express themselves as private citizens … to the degree that their speech does not impair working relationships of the department for which loyalty and confidentiality are important, impede the performance of duties, impair discipline and harmony among coworkers, or negatively affect the public perception of the department.”
“Speech [which] owes its existence to the employee’s professional duties may not be protected under the First Amendment and may for the basis for disciplinary actions,” the policy warns.
“While not prohibited, department personnel are cautioned not to post personal photographs or provide similar means of personal recognition that may cause them to be identified as a police officer. Many individuals that we contact in our profession become angry and on occasion seek revenge for official actions taken.”

Noting that posted comments become part of the “worldwide electronic domain,” the policy advises, “department personnel are required to be credible witnesses in criminal prosecutions and that credibility can be attacked using inappropriate post[s] on social media sites.”
Kendricks said social media accounts of applicants for police positions are subject review. Under the policy, the chief or his designee may make random investigations into postings of employees.
Among the prohibited content: obscene or sexually explicit language or images, or any other forms of speech that ridicule, malign, disparage or otherwise express bias against any race, religion, gender or “protected class of individuals.”
The policy goes on to state, “While not strictly prohibited, department personnel are cautioned against posting, commenting or otherwise transmitting speech of a political nature.”
Though the policy does not specify disciplinary procedures or penalties, it counsels that personnel “may be subject to civil litigation” for certain infractions.
Mayor Andy Keller said no council vote was required to implement the social media guidelines. “It’s a police department policy and was brought to council for awareness,” he told the News.
In other business, the council, following a workshop, set a public hearing for 6 p.m., Sept. 22, to approve the 2020 tax rate and next year’s budget,
The council proposes to hold the line on its tax rate, but rising appraised values will likely mean slightly higher tax bills for the average property owner.
The rate would stay at $0.55 per $100 of valuation. Coupled with an average 6.58 percent increase in taxable values, the proposal would boost the average homestead tax bill in the city from $464 last year to $495 this year.
The average homestead taxable value is rising by the same 6.58 percent — from $84,383 to $89,938, according to Medina County Tax Assessor-Collector Melissa Lutz.
The total proposed tax levy would generate $208,177 for the city in 2020. That’s up 6.47 percent from $195,469 last year.
Council members Bonnie Mangold, Kimberly Stiteler and Karl Lutz voted for the tax proposal last month. Wade Tschirhart voted against. Dale Adams was absent.
To keep this year’s tax bills at 2019 levels, the city would need to reduce its rate to $0.5272 per $100 – the so-called no-new revenue rate.
Assessor Lutz said La Coste’s tax proposal exceeds the “voter approval” rate of $0.5462, but remains below the “DeMinimus” rate. “Therefore it does not create a [referendum] election, but one could be petitioned,” she said.
By Kenric Ward
Reporter