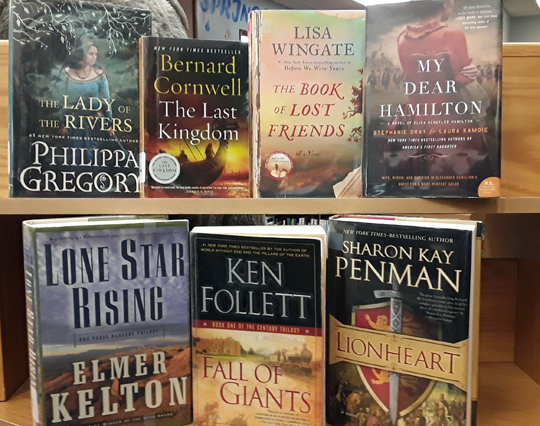 With fall fast approaching and 2020 becoming history, thank goodness, we thought it would be a fun to visit other times in world history. This week we are showcasing a very few of the many historical fiction books we have in our collection. Hope you enjoy falling back into a time long ago in anticipation of what is ahead of us. To view more of our historical fiction collection, visit our online catalog at: https://driscoll.biblionix.com/catalog/.If you are interested in viewing what’s new at the library click on the “what’s new” tab in the right hand corner of our online catalog. We are also available to help you by phone at 830-663-2993.
The Lady of the Rivers by Philippa Gregory – This book brings to life the story of Jacquetta, Duchess of Bedford, a woman of passion and of legend who navigated a treacherous path through the battle lines in the War of the Roses to bring her family unimaginable power. This is the first of fifteen books in a long but amazing series on the Plantagenet and Tudor history.
The Last Kingdom by Bernard Cornwell –The first in a twelve book series chronicling the epic saga of the making of England, “like Game of Thrones, but real”, the basis for The Last Kingdom, the hit Netflix series. In the middle years of the ninth century, the fierce Danes stormed onto British soil, hungry for spoils and conquest. Kingdom after kingdom fell to the ruthless invaders until but one realm remained. And suddenly the fate of all England—and the course of history—depended upon one man, one king.
The Book of Lost Friends by Lisa Wingate – This historical novel brings to life the dramatic story of three young women searching for family amid the destruction of the post–Civil War south, and of a modern-day teacher who learns of their story and its vital connection to her students’ lives. The startling stories are taken from actual “Lost Friends” advertisements that appeared in Southern newspapers after the Civil War.
My Dear Hamilton by Stephanie Dray & Laura Kamoie – The epic story of Eliza Schuyler Hamilton–a revolutionary woman who, like her new nation, struggled to define herself in the wake of war, betrayal, and tragedy. In this haunting, moving, and beautifully written novel, Dray and Kamoie used thousands of letters and original sources to tell Eliza’s story as it’s never been told before–not just as the wronged wife at the center of a political sex scandal–but also as a founding mother who shaped an American legacy in her own right.
Lone Star Rising by Elmer Kelton – The late Elmer Kelton was a Texas writer who was able to humanize many significant events in the evolution of Texas. While his characters may be fictional, the trials, tragedies, failures, and successes depicted are based upon diaries and biographies of actual Texas settlers. If you have every wondered about the true daily experiences of the men in the early days of the Texas Rangers (devoid of Hollywood scatology), you will truly love this trilogy.
Fall of Giants by Ken Follet – The first novel in The Century Trilogy, it follows the fates of five interrelated families—American, German, Russian, English, and Welsh—as they move through the world-shaking dramas of the First World War, the Russian Revolution, and the struggle for women’s suffrage. In future volumes of The Century Trilogy, subsequent generations of the same families will travel through the great events of the rest of the 20th century, changing themselves—and the century itself.
Lionheart by Sharon Kay Penman – When Henry died, Richard would take the throne and, almost immediately, set off for the Holy Land. This was the Third Crusade, and it would be characterized by internecine warfare among the Christians and extraordinary campaigns against the Saracens. And, back in England, by the conniving of Richard’s youngest brother, John, to steal his crown.The result is a powerful story of intrigue, war, and- surprisingly-effective diplomacy, played out against the roiling conflicts of love and loyalty, passion and treachery, all set against the rich textures of the Holy Land.