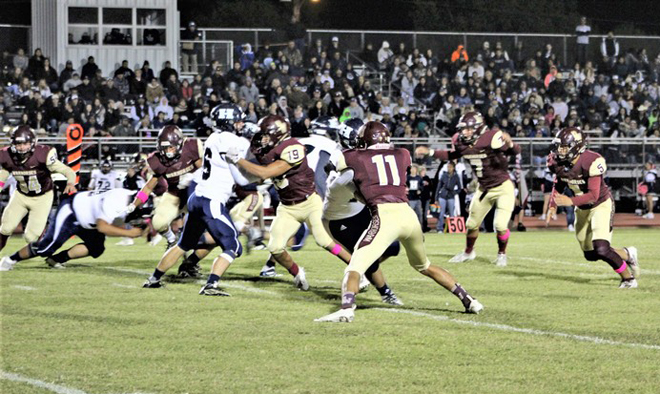 Devine’s “D” and special teams played a huge roll in the dismantling of the Crystal City Javelinas Friday night. Aggressiveness and awareness has suited these Warhorses just fine.
“Our defense came to play once again,” said pleased Defensive Coordinator George Villa. “Our effort was great, our communication on the field is getting better, our set recognition is getting better, and our thought process is way better. Because those things are better, our kids our having fun and are very aggressive right now. After watching film, there were obvious plays that our players made that stood out. Blaine Miller had his first career pick-six, Peyton Carr had a fumble recovery for a touchdown, Sergio Martinez forced a fumble with Brady Hackebeil recovering it, and Xsavior Martinez recorded his second interception in district play. We also had some big plays from Christian Gerlach, Buddy Santos, Leonard Pompa, and Jayce Hackebeil. We achieved 7 out of the 10 goals we want to achieve for each ball game, so that was huge!!”
Head Coach Paul Gomez was also happy with his defenses play. “We were solid! Coach Villa has a good feel for this defensive squad and the players have bought in. We have been aggressive and attacking these last two games. We are tackling much better and playing on their side of the ball. That is the effort that we have to give to play good defense. We have kept it simple and just let our boys go play. We are swarming to the ball and we did a fantastic job creating turnovers! Four turnovers and two scores off those turnovers is a heck of a night for the defense. The two scores that we gave up were on mistakes made by us. We had a missed tackle on the long run and then we threw an interception on a screen play. However, we always talk to the guys that we play with perfect effort and that mistakes are going to happen. Make them full speed and always answer an error with a positive series and that is exactly what we did the other night.”
7 of 10
Those seven of ten goals Coach Villa eluded to included committing less than 3 penalties, creating 2 or more turnovers, giving up less than 150 yards passing, forcing three or more punts, having five or more gang tackles, scoring two touchdowns, and having at least five tackles for loss.
Special teams
Special team play is improving every week thanks in large part to the kicking game. Special team coordinator Scott Taylor had this to say.
“Jacob Featherly was 6 of 7 on extra points and Brady Hackebeil had two good kickoff returns. One return for Brady was for 15 yards and another for 41 yards helped set up scoring drives. Sergio Martinez was very close to blocking an extra point and played a factor in their kicker missing the attempt. On our lone punt of the night, Leonard Pompa hit a nice angle punt off a good snap from Justin Contreras that pinned the Crystal City at their own 11-yard line.”
Coach Gomez elaborated, “Special teams was really good again this week. We had some good returns on our kickoff returns and we tackled really well on kickoff. Justin and Jacob did a great job kicking to their location as well. Jacob was solid on the extra point points. We did get one blocked on the last touchdown, so we have to make sure we are blocking every time we go out there and not relax. Leonard had an awesome coffin-corner punt that pinned them deep inside their own territory.”
By Jerel Beaty
Staff Writer