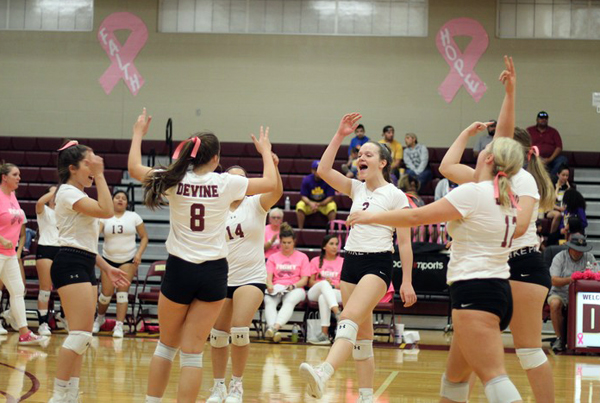 The Arabians added a win and a loss to their district record last week. They beat Carrizo Springs Tuesday night and then lost to Crystal City on Friday. The Arabians are still in second place in district with only two more games left this season. They will play Pearsall at home on Friday and then in Hondo on Tuesday.
Playing at home last Tuesday night, the Arabians had to work hard to beat Carrizo Springs in four sets. Devine quickly won the first set 25-18 but the Wild Cats came back in the second set to win 16-25. The third and fourth sets were back and forth tight games but Devine proved they were the stronger team by winning both 25-23 and 25-22.
“This was a hard fought win for us. We really had to pull together and dig deep. Carrizo played some really good defense tonight. At times we were out of sync but we got it together when it really counted. I think this was a total team effort because everyone contributed at some point during each set to get the overall win.” Coach Leigh Ann McIver
Crystal City
Crystal City is making a late season come back for a play-off position and beating Devine in five sets helps their drive. The first set was close and Devine won 25-23. That intensity carried over to the second set but Crystal City beat Devine 27-25 this set. The Javelinas beat the Arabians in the third set 25-18 and Devine won the fourth set 25-17. In the final set, both teams worked hard and played every point like it was the game point. Crystal City was able to gain the final two points needed for the 17-15 win.
“Our defense was not picking up balls like they usually do and we missed serves in a critical time. Both teams were fighting hard for this win but things just ended up not going for us.” Coach McIver
Crystal City stats: Kills: Megan Runyan 13, Bailey Oropeza 8, Macey Hein 7, Aleyna Gerlach 2, Janaee Wofford 4, Madison Pike 5. Aces: Allison Stevens 2, Myla Miles 1, Gabby Rodriguez 1, Wofford 2, Leah Herrera 3. Blocks: Runyan 3, Rodriguez 1, Hein 1, Gerlach 1, Pike 2. Digs: Stevens 8, Runyan 30, Miles 16, Oropeza 6, Rodriguez 30, Hein 19, Gerlach 6, Wofford 28, Destiny Moralez 1, Herrera 2, Pike 6, Jasmine Pompa 1. Assists: Hein 35, Wofford 1.
Carrizo Springs stats: Kills: Runyan 12, Oropeza 8, Hein 2, Gerlach 2, Wofford 8, Pike 7. Aces: Miles 2, Rodriguez 1, Hein 1, Wofford 2, Moralez 3. Blocks: Runyan 2, Hein 1, Pike 5. Digs: Stevens 5, Runyan 11, Miles 12, Oropeza 4, Rodriguez 14, Hein 16, Gerlach 2, Wofford 19, Herrera 5, Pike 1.
District standings as of noon on October 22nd: Hondo 6-0, Devine 4-2, Crystal City 3-3, Carrizo Springs 2-4, Pearsall 0-6.
By Dicy Chambers
Sports Writer