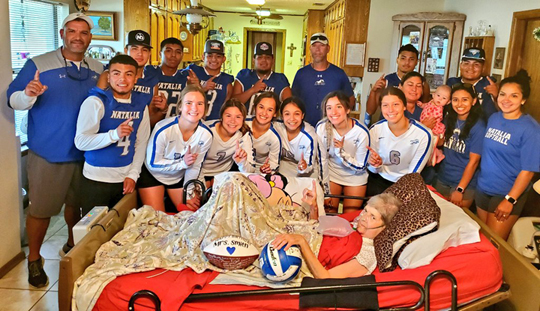 Thank you NISD Coaches-Athletes for honoring a true Mustang Fan
A beloved wife, mother, grandmother and #1 Natalia Mustang Athletic Fan Trudy Lynn Smith lost her battle with a Chronic Lung Disease and Ampullary Cancer last Thursday surrounded by family and friends.
Words could not describe, the gratitude we feel for the numerous phone calls, texts, visits, food and memories shared by not only the Natalia Community, but surrounding communities as well.
A very special moment took place last Wednesday, June 30th when a group of Natalia ISD Coaches and Athletes went out of their way, to pay my mother a visit at her home in Natalia in her final full day of life.
One by one, Natalia Athletes walked in with their volleyball and football jerseys on and greeted my mother followed by members of the coaching staff. Natalia ISD Athletic Director Ilyan Martinez delivered words of encouragement to my parents which brought tears to all in the room.
A few memories were shared about my mother, who has attended over 4,000 Natalia ISD Athletic Games over the past 50 years of her life.
Concluding the small gathering, my mother raised her finger in the air, as family, friends, athletes and coaches sang the Natalia Fight song as my mother sang every word.
One day later, my mother felt closure as she had the opportunity to say her good-byes to most of her family along with the athletes and coaches she so very much loved.
One day after singing the Natalia Fight song, the victory was won as God called her home.
Although my mother will no longer be able to attend Natalia Athletic Games, or serve as one of the best wives, mothers and grandmothers one could ask for, she will have the best seat in the house to watch over those she cares about most.
Coach Martinez, staff and athletes: A heartfelt thank you once again for going above and beyond to show my mother how much she means to your program and our community. It was a Class Act and will be a memory that will last a life-time.
To the remainder of our family, friends and community, thank you so much for all of your kind words and prayers.
She loved her Mustangs, Lady Mustangs, Spurs, Cowboys and Texas Longhorns and lived 67 happy years of life before going home.
Thanks mom for giving me an opportunity at life (adopted at 5 days old). You have raised two children better than we deserved, married to an awesome husband in what would be 50 years in September and have been the best grandmother five grandchildren could ask for!
Go rest high on that mountain as Vince Gill would say, until we meet again! We love you.
Eric Smith- A Proud Mustang and the Son of Trudy Smith