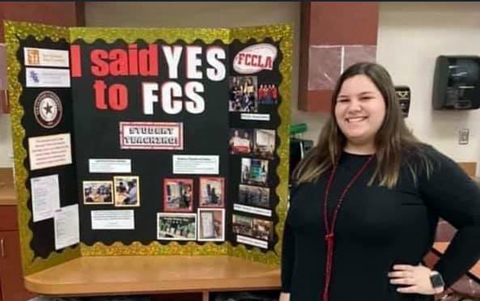 Once again Devine FCCLA had amazing results with their STAR events! This year’s National Leadership Conference was held in Nashville, Tennessee, from June 27 through July 2, 2021. As a result of COVID, this year’s conference was a hybrid format with only a few competitions held in-person. All of Devine’s participants filmed their presentations in April and submitted them to be judged prior to the NLC so, sadly, the students did not get to travel again this year. This setback did not stop these chapter members from succeeding, though. Three projects earned gold medals and one earned a silver medal.
For the first time ever, the top three finishers in each event were invited up on stage to receive their medals at the National Leadership Conference. Senior Caitlyn Breiten was one of those delegates honored with her project, I Said Yes to FCS! in the Level 3 – Say Yes to FCS event. Breiten placed second in the nation and, as a result, won a $35,000 scholarship to Sullivan University, a private college in Louisville, Kentucky. On a side note, she will be attending Texas A&M, San Antonio as planned.

Analea Brooks, Caleb Martin and Andrea Sanchez, all seniors, competed in Level 3 – Interpersonal Communications with their project, Cyber Safety. They placed fourth in the nation this year missing the stage ceremony by one place! Brooks and Sanchez competed at Nationals last year while this was Martin’s first time.

Juniors Kelli Geyer and Karma Herring continued their NLC success. This is the third year that they have competed at Nationals and the third year to receive gold medals. Their project this year was Happy and Healthy in Level 3 – National Programs in Action and earned 4th place in the nation, as well.

Junior Brian Schaefer claimed 9th in the nation with his first appearance at NLC. His project was titled STOP: Service To Other People as he competed in Level 3 – Chapter Service Project Display.
Mrs. Steubing and I are so proud of these students for putting in the amount of effort and all the countless hours it takes to have these results. We know that all of them are going to be future leaders in whatever they choose to do in life. These projects teach them so many wonderful skills that they will utilize throughout their lives!
Hopefully, next year will not be affected by COVID and Devine FCCLA students can once again shine at the National Leadership Conference that will be held in San Diego, California.
By Korrey Paige