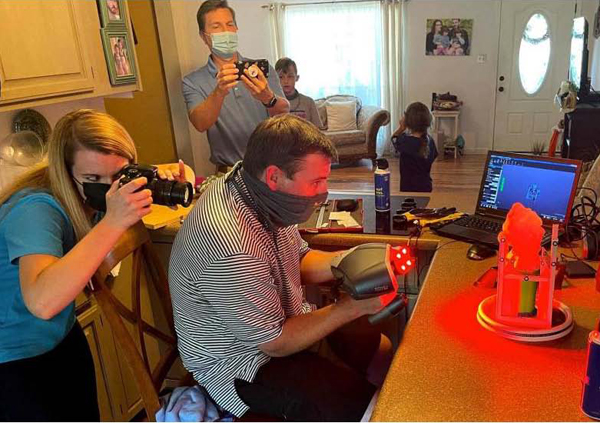 The evening of April 28, 2021 was a rough night for Medina County, but I suppose it was “5 o’ clock somewhere!” This summer, the State Climate Extremes Committee (SCEC) met to verify and validate the large hailstones that fell in Medina County on the evening of the F-1 tornado. The committee agreed that one of these monster hail stones did indeed set four records in the State of Texas, but according to the report, another local family photographed a “gargantuan” hailstone that might have been slightly larger. However, experts were unable to verify it, noting that this legendary hail stone was “ultimately used for margaritas”.
It should be noted that there have been other credible reports of slightly larger hail stones than the new record-holder, but no official records were kept. The SCEC was formed in 2006 due to this need, and they are the authority that evaluated this case. See more about this later in the article.
The SCEC stated, “After reviewing the observational and meteorological evidence, the means and method of measurement, and previously documented stones, the SCEC unanimously agreed that the hailstone retrieved near Hondo on 28 April 2021 would set the inaugural SCEC record for the State of Texas in four metrics. In particular, the committee found that the following were true and valid:
LOCATION: 1 SSW Hondo, Texas
DATE: 28 April 2021, approximately 7:35 pm CDT (local time)
HAIL CIRCUMFERENCE: 19.73 inches
HAIL DIAMETER: 6.416 inches
HAIL WEIGHT: 1.26 pounds
HAIL VOLUME: 40.239 cubic inches”
The committee considered the validity, meteorological plausibility, and measurement practices associated with the hailstone in question.

Background
During the afternoon and evening of 28 April 2021, multiple supercells moved east along U.S. Highway 90 from Del Rio to
San Antonio, Texas, between 2000 UTC (1500 CDT) 28 April 2021 until 0500 UTC (0000 CDT) 29 April. The initial supercell developed just southeast of Del Rio. The storm crossed into Val Verde and Kinney counties, producing 2 to 3 inch diameter hail in Del Rio and Brackettville. A second supercell formed and followed a similar path as the first supercell.
Both storms continued to produce large hail across Uvalde 2 County, before merging as they entered Medina County. The combined storm updraft grew larger and continued to move along U.S. Highway 90, with large hail being reported in Sabinal, D’Hanis, Hondo, and Castroville. Storm rotation increased and produced a tornado, which tracked on a 1.8 miles long, 600 yard wide path approximately 5 to 6 miles southeast of Hondo, producing EF-1 damage on the Enhanced Fujita Scale. The storm’s rear flank downdraft also strengthened and produced a wide swath of EF-0 to EF-1 wind damage from D’Hanis to Castroville.
The storm’s mesocyclone temporarily weakened, but strengthened again and produced 1 to 2 inch hail on the northwest side of San Antonio, western New Braunfels, and San Marcos before finally weakening over Austin. The combination of high winds and large hail produced extensive damage from just east of Sabinal to D’Hanis, Hondo, and Castroville, primarily along and south of U.S. Highway 90. A RV park in D’Hanis suffered extensive damage from 2.5 inch or larger hail being blown by 75 to 100 mile per hour winds. Another example of the wind driven hail damage was 1 mile west at a local gas station.
The first gargantuan hailstone reported to local media and NWS Austin-San Antonio was discovered south of U.S. Highway 90 in Hondo. The hailstone fell around 0040 UTC on April 29 and was estimated between 6 and 7 inch in diameter by the finder. Dr. Matthew Kumjian of Penn State University used photogrammetry to estimate the diameter between 6.27 and 6.57 inches. Unfortunately, this hailstone was never measured with a ruler or similar device, and was ultimately used for margaritas according to the person who shared the images. Additional large hailstones reportedly fell in the area and pictures were sent to San Antonio local media. While the images show rulers with measurements of 5 to 6 inches in diameter, NWS Austin-San Antonio has been unable to verify the validity of these hailstones, the time they fell, or their location.
The potential record hailstone discussed in this report fell 1 mile SSW of the center of Hondo, TX. Thi slocation is approximately 0.5 mile from the location of the first hailstone mentioned above.

Examination of Previous Events
According to NOAA, there was no official hail record for the state of Texas prior to this event. The largest credibly reported hailstone diameters in Texas prior to the April 28, 2021 storm that produced the candidate Texas state record were the following (but due to various reasons, the Hondo hail stone is reportedly the largest documented stone).
8 inches, Washington Co., Dec. 6, 1892
7-8 inches, Winkler Co., May 31, 1960
6 inches, Moore Co., June 12, 2010
6 inches, Ward Co., May 10, 1991
The Winkler Co. hailstone was listed as 8 inches in the NCEI Storm Events database as of 2020 but is presently (May 10, 2021) listed as 5 inches. The value in the NCEI Storm Events database should be reexamined and possibly restored to at least 7 inches.
No direct photographic evidence or descriptions of measurements exist for the Washington County and Winkler County hailstones. No other measurements (volume, weight, or circumference) are available for any of the four hailstones listed above.
The Hondo hailstone was initially reported unofficially at 9 inches, but based on its shape in initial
photos and at the time of measurement by the Insurance Institute for Business and Home Safety (IBHS) team, a likely initial unofficial size was closer to 7 inches. The IBHS measured diameter was 6.416 inches. The Hondo hailstone therefore appears to qualify as the largest documented hailstone.
By Kayleen Holder
Editor