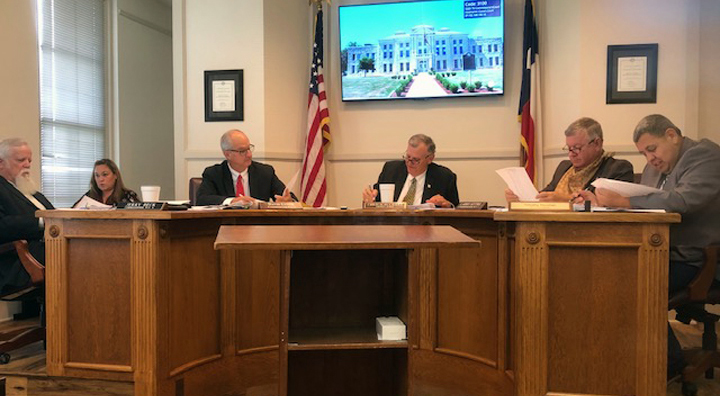 A group of Natalia area residents, including Mayor Tommy Ortiz, called on the Medina County Commission to whittle back its proposed tax rate and give property owners a break.
At a Sept. 24 public hearing in advance of the commission’s scheduled Sept. 30 vote, the Natalia contingent urged fiscal restraint, saying that homeowners are struggling in a COVID-battered economy.
“There are wants and there are needs. This is a no-brainer,” said Napoleon Herrera. “The county doesn’t need more money.”
The county’s proposed tax rate is actually 0.8 percent lower than in 2019, but higher appraised values will push the average homestead tax bill up 7.46 percent.
For an average homestead property valued at $164,939, the increase amounts to $63, according calculations by county Tax Collector-Assessor Melissa Lutz.
Total tax levy on all county properties is projected to rise to $20,606,728 — an 8.04 percent increase over 2019.
“You’re getting more than $1 million more [in revenue] and approving raises, but can’t lower taxes?” Natalia School Board member Eric Smith asked.
“Hold off on taxes for this year and let people get back on their feet,” suggested Gordon Gentry, a longtime Natalia resident.
Mayor Ortiz said his city, one of the poorest in the county, “has been left out on projects” that benefited other communities.

City Administrator Rene Hinojosa, reached by the News in Natalia, said the city “is an integral part of this county and deserves to receive a fair ‘piece of the pie.’”
“Our residents are hard-working contributors to the county and deserve to have a proportional amount of tax money invested here in this community,” Hinojosa said.
Noting the three-minute limit on individual public comments at the hearing, Herrera warned commissioners there would be political repercussions for approving what is effectively a tax increase.
“Opponents will have more than three minutes to chew you up,” he said.
Precinct 2 Commissioner Larry Sittre wasn’t fazed.
“I get threats daily,” he said. “I have people telling me if I don’t get a speed bump at their driveway, ‘I’ll vote you out [of office].’”
In an earlier interview with the News, Sittre said that without appropriate levels of public funding, “You’ll get into a Third World country situation. If $50 is going to break you, you’re in trouble anyway.”
“You can do a lot of good with a little cash,” he added. “The question is how cheap do you want to be?”
The Natalia City Council voted last week to lower its property tax rate. But as with the county, higher appraisals will mean a slight increase on most city tax bills.
Natalia’s levy on an average homesteaded property – valued at just $63,582, about $100,000 less than the county average — will bump up the levy from $520 to $525 on the average home. The city expects to receive $343,554 in property tax revenue, $7,642 more than last year.
Other than Precinct 4 Commissioner Jerry Beck — who pointed out that appraisals are not performed by the commission, but by the Appraisal District, a separate entity – no other commissioners commented.
The commission will vote on the 2020 tax rate at 9 a.m., Wednesday, Sept. 30 at the County Courthouse in Hondo.
By Kenric Ward
Reporter