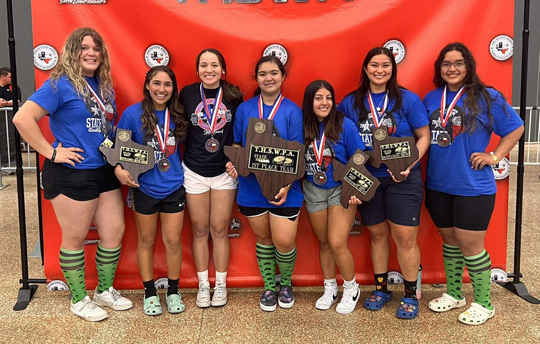 The Natalia Lady Mustangs won their 1st ever State Powerlifting Title along with five individual titles last week in Corpus Christi at the American Bank Center on Shorline Drive. Natalia dominated as a team with 43 team points finishing out in front of 50+ other schools including 2nd place Edinburg Idea College Prep and 3rd place New Waverly.
“We could not be more proud of our program,” stated Natalia Lady Mustang Head Powerlifting Coach Jasmine Vasquez, who happens to be the first Lady Mustang to ever win an individual title in the sport. “This championship belongs to EVERY Lady Mustang who ever stepped in that weight room and put the time and effort to build this program. We would not be here without you.”
The Natalia Powerlifting program started just ten years ago with three lifters and to show you just how far they have come, they have advanced numerous girls to regional including the twenty one young ladies this season. This year marked the third straight regional title for Natalia prior to the state title in which eight Lady Mustangs represented Natalia.
5 Lady Mustangs win State Titles!
105 lb. weight Class- Senior Meg Martinez
Senior Meg Martinez was able to win the State Title in her weight class with a 755 lb. total. Her total included a 275 lb. squat, a 200 lb. bench press and a 280 lb. dead lift.
“Meg was one of our veteran lifters this year and was a 4X Regional Qualifier and a 4X State Qualifier for us,” Vasquez said. “Ending her career as a state champion was no easy feat. She finished her squat 35 lbs behind and knew it would be a challenge, but nothing she could not handle. She has by far one of the best benches I have seen in the program which helped equal the playing field as we set into deadlift. Deadlift was not her best lift this year, but it didn’t stop her from going to pull a PR of 280 to win gold!”
114 lb. weight class- Senior Jalesca Schorsch
Senior Jalesca Schorsch was a 3X Regional Qualifier and a 3X State Qualifier and finished 3rd place just a year ago. She was able to win the title thanks to a 840 lb. total which included a 350 lb. squat, a 175 lb. bench and a 315 lb. deadlift.
“She put in countless hours in the weight room to earn herself without a doubt, a state title,” Vasquez said. “She had all of the numbers to win it and did a great job of taking care of business as she finished 90 lbs. ahead of her competition. Over the last four years, not only have we watched her strength grow, but her confidence and no one is more deserving of a state title.”
181 lb. weight class- Senior Gabby Munoz
Senior Gabby Munoz was a 3X Regional Qualifier and battled at state for her 3rd time where she was able to win the title with a 1,060 lb. total. Her total consisted of a 475 lb. squat, a 195 lb. bench press and a 390 lb. deadlift.
“After finishing 2nd a year ago, she worked everyday with one thing on her mind- A state title,” Vasquez said. “On Thursday she left no doubt who the strongest was in the 181 lb. weight class by winning by 135 lbs. She has led our program all year with her work ethic and dedication to the weight room and the team. SHe has always been a team first lifter and earned her right to a state championship. We will miss her lead by example mentality and her ability to show up week in and week out and dominate the competition.”
198 lb. weight class- Senior Jasmine Ramon
Senior Jasmine Ramon was a 4X Regional Qualifier who battled at state for a 4th time before winning her 2nd state title in a row! She did so with a 1,050 total, which included a 430 lb. squat, a 225 lb. bench press and a 395 lb. deadlift.
“Jasmine has not only developed as a lifter over the course of her career, but also came out of her shell within our program and is someone we will miss,” Vasquez said. “She PR’d in squat and bench and finished her career best with 1,050 earning a second state title which is impressive. She was a big part of securing our team title.”

220 lb. weight class- Junior Jiselle Gonzales
Junior Giselle Gonzales was a 3X Regional and 3X State Qualifier for Natalia who won her 2nd state title thanks to a 1,145 lb total. Her total included a 450 lb. squat, a 290 lb. bench press and a 405 lb. deadlift.
“She showed a lot of guts on Thursday after missing her first two squats and faced a bomb out,” Vasquez said. “She came through when it mattered and dominated the rest of the meet her 1,145 lb. total. She won her 2nd title by 160 lbs. helping her team secure the title. Although only a junior, she has been a strong leader for our program as we look forward to her carrying the torch next year and leading our team.”
132 lb. weight class- Senior Angelica Padilla 3rd Place
Senior ANgelica Padilla was a 4X Regional and 2X State Qualifier who was able to finish in 3rd place in her class thanks to an 815 lb. total. Her total included a 335 lb. squat, a 185 lb. bench and a 295 lb. deadlift.
“Jelli started out as a powerlifting manager when she was in junior high, but quickly made a name for herself when she entered as a freshman,” Vasquez said. “Fast forward to her senior year, she was sitting in 6th entering the state meet and was able to put together her best meet of the season. With a 20 lb. PR deadlift, she secured herself a 3rd place medal. She is one of the hardest working athletes that has gone through our program and will be missed.”
259 lb. weight class- Sophomore Kate Robinson 2nd place
Sophomore Kate Robinson was a 2X Regional Qualifier who battled at state for the first time. She was able to secure a 2nd place finish thanks to a 980 lb. total which included a 430 lb. squat, a 200 lb. bench and a 350 lb. deadlift.
“Kate only being a sophomore, has grown tremendously in her small time with us and we look for her to lead our program in the future,”Vasquez said. “She had a great meet and was able to secure 2nd place adding big points to our team total which ultimately led to a state title.”
114 lb. weight class- Junior Dominique Banda- State Qualifier
Dominique was a 2X Regional Qualifier who advanced to state for the first time.
“Heading into state, she was sitting in 4th in the rankings,” Vasquez said. “Unfortunately, she faced a setback with a back injury the day before weigh-ins. Nonetheless, she is just as much a part of the state title as any other lifter. We have rhe opportunity to have her one more year and I look forward to her future accomplishments.”
Just a year ago, the Lady Mustangs missed the State Title by one point, but left no doubt this season.
“We did it for the name across our chest and this championship belongs to you Natalia,” Vasquez exclaimed.
Powerlifting Managers who also played a big part of the success included Isaiah Santoya, Jasmine Rios and Janessa Ruiz. The Lady Mustang Powerlifting Team will be featured in the Natalia Bluebonnet Parade this coming Saturday!
Eric Smith
Staff Writer