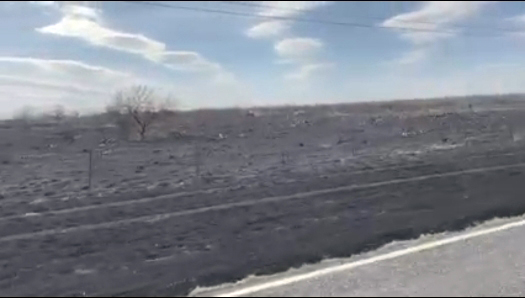 Fires and dry windy conditions have kept volunteers from Devine, Bigfoot, Moore, Natalia and Lytle VFDs quite busy lately. This FM 472 fire, pictured above, spread over 220 acres, about 3 miles South of Bigfoot this Sunday evening, March 20th.
“We evacuated two homes because that fire was just spreading so fast. As we were fighting that fire, we received another call back for a flare up at the scene of 70-acre fire we had been fighting Saturday,” said Denise Woody, a volunteer at Bigfoot VFD.
“We have responded to a total of 10 fires in the last week, including 320 acres just in Bigfoot,” VFD Lieutenant Woody said. “We fought two 8-hour calls this week, and a total of 35 hours at Bigfoot VFD. We pumped 61,050 gallons out of trucks, because we don’t have hydrants. So we are working on our trucks tonight, with all the wear. We have never had a fire season in the Winter like this one in all of my 13 years with the department. Last Spring we got a lot of rain, and the grasses grew, and then we hit a drought and all that grass turned brown. There are hundreds of homes in the Patton Ranch Subdivision, and. If you see smoke or any kind of flame, you need to call right away. Time is really precious, especially right now. We meet on Thursdays Bigfoot VFD at 7 if anyone wants to join.”
Our neighbors in Atascosa County battled a fire spanning over 2,500 acres last week in Christine as well, where a vast amount of air support was needed to control it.
West of Fort Worth, whole communities are being evacuated a fire this past Thursday continues raging forward as of this week. The fire has claimed some 54,000+ acres, along with homes and property, even garnering the attention of The New York Times.
We cannot thank our volunteer firefighters from area departments enough. Their selfless service for hours and hours at a time, call after call, is astounding and has our utmost expect. No volunteers work harder than our volunteer firefighters.

Lytle VFD Chief Matt Dear gave a short and eye-opening account of some of the many fires in Atascosa County this past week.
“We’ve been running all kinds of grass fires, and they are spreading really quick and igniting these houses on fire. People aren’t being smart about fire. The largest fire was in Royal Oaks Drive on FM 476 which started with a controlled burn,” Dear said. “The Royal Oaks fire was about 40 acres, but we lost 3 houses, 4 carports/sheds, and 15-20 cars. That was on the same day they had a double structure fire in Natalia, and they also had that huge fire in Christine. We had departments from as far as Helotes coming to help us, along with the local fire departments.”
He reminds citizens that something as simple as keeping the grass cut around your home would help out a lot.
“I have never seen so many airplanes and helicopters deployed to fight fire in our area as we have lately, and I’ve been fighting fires for the past 15 years. We are getting calls for structure fires several times a week, and most of them start with a grass fire that spreads and spreads fast,” Chief Dear said.
He reminds citizens that there is a burn ban across the area, and an accident could lead to Felony Arson charges, accident or not.
“According to State law, if I let a controlled fire leave my property and spread to a neighbor’s property, I could be facing criminal felony arson charges,” said Chief Dear. “People need to realize that.”
“The volunteer firefighters in our area are huge unsung heroes,” Chief Dear notes, “They aren’t getting paid a penny, and they are running calls day and night right now.”