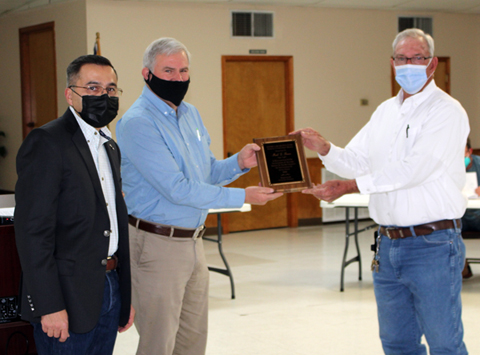 The City of Lytle presented Mark Bowen with the 2020 Annual Daniel J. McGrath, D.V.M. Citizenship Award during their regular meeting on February 8, 2021.
“Tonight, we would like to show our gratitude and appreciation for your service Mark to our community”, said Ruben Gonzalez, City of Lytle Mayor. “Throughout the years, you have volunteered (this is a non-paid job with lots of responsibilities), you volunteered to make a difference in Lytle and have touched others in our community by your personal involvement, both as a community leader, public servant and family man”.
“Mark you are valued for being on call for those late night calls of either a major accident or incident from the police department or when getting a late night call from our public works department.
“Mark you are valued for being at all the meetings you attended and documents that you had to sign representing our community and keeping things going for our city.
Mark Bowen served 26 years, 14 of those as a city councilman and 12 years as the Mayor of Lytle.
Things that Gonzalez pointed out that came to mind about Mayor Bowen during his tenure as Mayor of Lytle from May, 2008 to November 2020 are:

Lytle’s ordinances were re-codified, which had not been done since 1978. The Lytle Animal Control facility was built. The Police Station was built. Gidley Square was built. The Fire Department was able to remold its fire station. The City Hall was remodeled. John Lott Municipal Park was renovated. Water Well #4 was started, and would have been completed if it wasn’t for all the obstacles that the city has encountered. One thing that stands out about Mayor Bowen is that he was very supportive of Lytle’s non-profit groups like the fire department, the VFW, Chamber of Commerce, Lytle Allies and the NHS. Other things that he will be remembered for are how much he loved bringing back the 4th of July Fireworks Show, holding the annual hayride, and allowing the employees to get the street decorated for the Christmas season and this event.
“Mark, you are valued for the safety of our city by committing volunteer hours to our citizen’s patrol and being an extension of PD’s eyes and ears. You are also valued for hanging in there with those interesting conversations with Richey.
“You are valued for always supporting development in our city… putting in a little extra with our Motto “A City on the Grow.”
“Lastly, you are valued for your family and religious priorities both in Lytle and Devine. You set the example by holding a key position in your church and making sure we didn’t forget what it is about,” said Mayor Gonzalez.
As a way to thank him for his time as a public servant, they gave him three gifts, one for his time as a councilman, one for the time as a Mayor, and one for being selected by council as the Citizen of the Year. “Thank you for your committed service and involvement to our community.
“Thank you for the award. I grew up here and the community is my family. It’s been fun and busy. Just a few months into my first year as Mayor, Josie said there is this guy named Gabe Garcia and we have to plan a huge event. And it was huge. It’s been full speed ahead from the beginning.”
By Kathleen Calame
Publisher