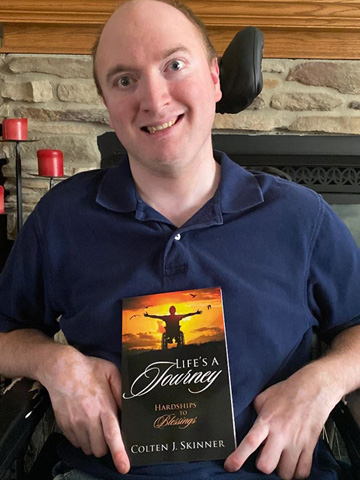 “Keep fighting and chase your dreams! You can do anything if you put your mind to it,” says Colten Skinner, 29. And Skinner has proved that, leading by example. Simply hearing him say those words shows his determination and triumph. A neurological condition called Ataxia Telangiectasia (A-T) makes it physically hard for him to speak out loud, but he fights past it with a smile so loud you can hear it.
He has recently written and published a book full of his adventures and battles. What an inspiration it is. The glass is always half full when you are talking to Skinner, and his book is no different. As I read it, I laughed out loud at his comical adventures and zest for life, and his attitude definitely rubbed off on me.
The extremely rare disease that he battles (called A-T) makes children more than 1,000 times more likely to develop cancer, and usually causes nuerodegeneration and ataxia that leads to a wheelchair by ages 10-12. Life expectancy is much too low, though researchers and doctors are working hard to change that every single day and making great strides. Colton skinner pays no attention to that anyway, as he is too busy living life to its fullest.
“I got my first wheelchair in 6th grade,” he writes, “It did not take long for us to get accustomed to our new rolling way of life. Life is ours for the taking..We did not let our wheelchairs keep us from what we wanted to do or places we wanted to go. We just had to go about things differently.”

Skinner got a standing ovation as he graduated high school, having recently battled and beat cancer too (as so many A-T kids do). He was also named the Homecoming King of his school. He went on to attend college and got a Bachelor’s of Arts degree in Business Management. He is going on his third year serving as a Deacon at his church in Illinois. He is still looking for his dream job, and hopes to help other cancer patients and A-T families by sharing his story and his strength.
Skinner notes that he and his brother Duey were determined from the beginning, not to let A-T “get the best of us.” When it came to their doctor’s dreary prognosis about life expectancy, Skinner says “Boy did we prove them wrong!”
He shared that he and his brother, who also had A-T, participated in all kinds of activities at school, even dodge ball, mom says. “Some teachers would look at us and say ‘Definitely not,’ but others realized we can do this, we just have to go about it a little differently.”
Skinner says he has drawn inspiration from his faith in God and one of his favorite baseball players, Jon Lester, who also had the same kind of leukemia that Skinner beat.
“I have so many stories, people told me I should write a book, so I figured I would,” Skinner said in an interview last week.”One of my favorite chapters is chapter 5, about going to Boston and everyone I met out there. I would say Chapter 1 about my family is also one of my favorites, personally.”
“My all-time favorite quote is ‘If you don’t believe in yourself, no one else will’,” said Skinner, who used several quotes from great thinkers in between his own stories. He also noted his favorite Bible verse is John 3:16.

This month, he has a goal of getting at least one of his books to every state in the Country, and as many countries as possible.
Search for “Life’s a Journey: Hardships to blessings” by Colten Skinner on Amazon. Colten’s attitude, determination, and smiles are truly infectious, and this book is full of smiles.
To all the A-T families out there, and to anyone who is fighting a tough battle, he wants to say “Things can be rough sometimes, but it’s worth it to keep pushing on with the journey,” Skinner said with a smile..so big…you can hear it.
When asked if he thinks we are going to kick A-T’s butt someday, he quickly responded, “Yes! Yes, I do!”
You can buy it on Amazon or if you’d like an autographed copy, write to:
Colten Skinner
25084 Andrew Avenue
Jerseyville, IL 62052
By Kayleen Holder
Editor