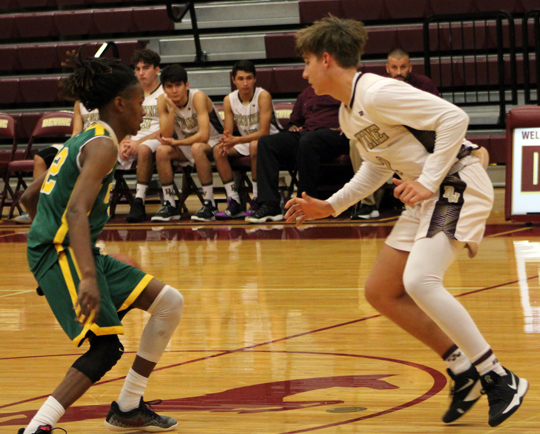 The JV Warhorses made quick work of the Cotulla Cowboys on January 3rd. Winning 60-6, Coach Evan Eads was proud of the win and said “It was our most aggressive defensive game of the year.” This win puts the Warhorses at 9-8 for the season and two more games until district starts against Crystal City on January 17th.
Weston Byrd scored half of the teams 18 first quarter points by sinking 3 three pointers. In the second quarter Brian Schaefer scored 6 while Byrd had 4 along with Chris Ortiz and Payton Carr. Starting the third quarter leading 28-6, the JV Warhorses continued to dominate outscoring the Cowboys 22-2.
Byrd 21, Xavier Contreras 9, Schaefer 9, Angel Espinosa 4, Ortiz 9, Carr 7. Q1 18-2, Q2 28-4, Q3 50-6, Q4 60-6. FTP 33%.
By Dicy Chambers
Sports Writer