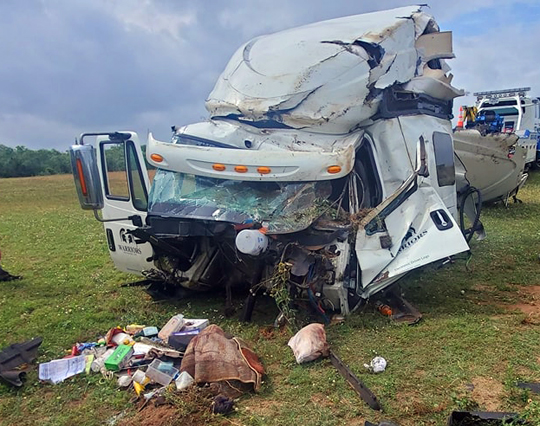 The driver of this truck was trapped inside the wreckage for over 8 hours after running off the interstate just south of Devine around 10 pm. A passerby called for help after spotting the overturned truck on the morning of July 4th, and multiple first responders rushed to the scene to help with a very complicated extrication.
“The driver, identified as Julian Vasquez Morales of Mexico, stated the accident happened the night before, on Saturday, July 3rd, but nobody found him until the next morning. At daylight, a passerby noticed the overturned truck and called for help,” stated Devine PD Lieutenant Chris Andrews.

The driver was hauling a heavy load of empty glass jars when he overturned after running an estimated 100 yards off Interstate-35 around MM 122, the length of a football field.
Devine Fire and Rescue performed the rescue extrication which lasted around 45 minutes.
“FF Daniel Ehlinger and Paul Gengler were the lead on the extrication, and they did a heck of a job in executing a very complicated extrication,” said Devine Fire Chief Greg Atkinson. “We had to be very precise due to the fact that the man was pinned between the dash and the side door that was the only safe way in. Cutting into it anywhere else would have de-stabilized the vehicle due to the position the vehicle and trailer landed in, and we would have risked the vehicle overturning again. We also wanted to get in as fast as we could because the driver had already been pinned there for several hours.”
Airlife was called, but refused to pick up due to unfavorable flying conditions.
Morales was rushed to the hospital by EMS in stable condition for a possible broken arm and ankle, according to Devine PD.
Devine PD units, DPS, and Devine Fire Department all helped at the scene.
Volunteer firefighters responding were D. Ehlinger, Capt.M Saldana, Chief G Atkinson, P Gengler, and M Dossey. Special thanks to all emergency responders who are there in our time of need. 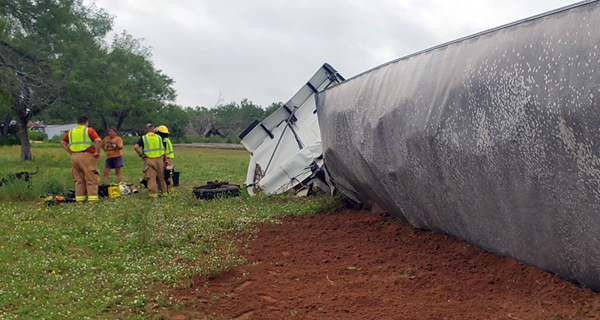