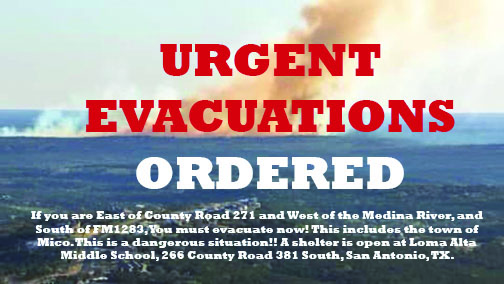 Medina County Emergency Manager Keith Lutz broke the bad news to us around 6PM…..”There is just no way to put it out right now,” Lutz said.

“It’s the worst kind of fire due to the terrain and the wind and dry conditions. They are laying down fire retardant and the fire is jumping ahead of it.”

“Experts are expecting this to be a multi-day event,” Lutz said. “I just got off a phone call with CNN.”

Several subdivisions on the north end of Medina County are in great danger, according to Sheriff Randy Brown. A short update from Sheriff around 5:30PM :

“If you even smell smoke, you need to pay attention. And if you are in one of those evacuation areas–you need to pack up and go. That’s all there is to it -Sheriff Brown

“It’s threatening to jump the highway at 1283, and we are not having much luck stopping it,” Sheriff Brown said. “The wind keeps changing directions.”

The map above was as of 6 PM on 3/26/22. It will NOT be updated in real time. Refer to social media for further updates. It is designed to show the general area of SOME of those in the path of this fire, which is expected to be a multi-day event.

Medina Co TX : There is a mandatory evacuation in place for all residents in the following area North and Northeast of the fire near Medina Lake. If you are East of County Road 271 and West of the Medina River, and South of FM1283, You must evacuate now! This includes the town of Mico. This is a dangerous situation!! A shelter is open at Loma Alta Middle School, 266 County Road 381 South, San Antonio, TX. See social media for updates

The subdivisions listed on the previous message issued in the EARLY AFTERNOOON of 3/26/22 stated: Summit Ridge, Bear Springs, Ranchland Oaks, Medina Oaks, Laurel Canyon, and the general area.  That was last listed as voluntary evacuations, but Sheriff says “that’s subject to change any time”.

NOTE: Some of the county’s emergency messages are having long delays in getting to some cell phones (including mine). So please watch the social media side as well.

Other officials noted: “This fire continues to burn with limited containment on the north. Residents need to heed evacuation orders. All vehicle traffic needs to avoid the area as it is preventing response crews from reaching areas of importance. Neighborhoods north of 1283 need to have an evacuation plan and be prepared to leave if advised.”

See social media for up to date information as the evening progresses.