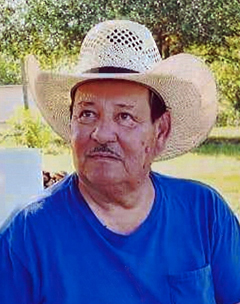 Arnulfo Flores Jr was 63yr old. He was a resident of Lytle Tx. We are hoping that this story will remind people to be safe and to never under estimate this deadly virus. My father in law was a pretty strong man. He was a fighter and fought ‘til the end.
This all started On Sunday December 13th. What we thought was a normal Sunday turned out to be just the complete opposite. That Sunday he started to feel slightly sick, feeling tired, had headaches, and a slight cough; however he had no fever. The next couple of days, no significant change. He still had some aches and fatigue but his breathing was not yet affected.

On Tuesday December 15th, he decided to go get tested for covid and came out positive. He completed his 10 day quarantine with no more symptoms. Then on December 24th, he started to feel sick again with headaches and fatigue. Over that weekend, he developed fever but only at night.
He started to throw up phlegm on Sunday December 27th, and couldn’t hold anything down. His breathing was still ok. However overnight, that Sunday, he had a rough night and was almost like in a state of delusion.
Monday night into Tuesday morning was the worst, and my mother in law decided to take him to the emergency room. Once he arrived at the hospital, he was giving the option to be put on the ventilator, which he decided to go ahead and do, because he couldn’t breathe.
Within the next week we stayed hopeful, but he slowly declined, leading to his passing. On Wednesday January 6th, at 10:39 pm, he was pronounced dead. Seven years ago he had a kidney transplant, so we knew that if Covid ever hit him, he would have a hard time recovering from it, but never in our worst dreams would we think that it would end up like this. He stayed home a lot and had minimal interaction with people because of that same reason, so how he came in contact with covid is truly unknown. Arnulfo leaves behind a wife of 45 years. Two daughters, two sons, seventeen grandkids, and three great grandchildren.
Submitted by the Flores family