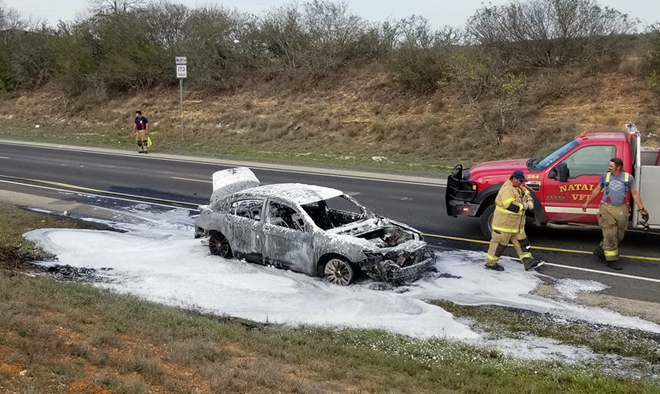 A young woman and a child were headed toward Devine on Hwy 173 this past February 22, and were thankfully able to stop and get out of the car safely before it erupted in fire. The driver said there was smoke coming from the engine compartment of the 2013 Chrysler 200, and emergency crews were quickly toned out to help. It wasn’t long before the vehicle was totally engulfed in flames.
The fire occurred near the intersection of Hwy 173 and PR 6625. Crews had to shut down both lanes of Hwy 173 for a short while, and opened the highway to one lane for about 45 minutes until the scene could be cleared.
Meanwhile, as traffic stacked up, an inpatient motorcyclist tried to go around the scene by driving up the embankment on the side of the highway and ended up crashing on the embankment right above the burning car. Thankfully, he did not slide down into the fire, and was able to leave on his own.