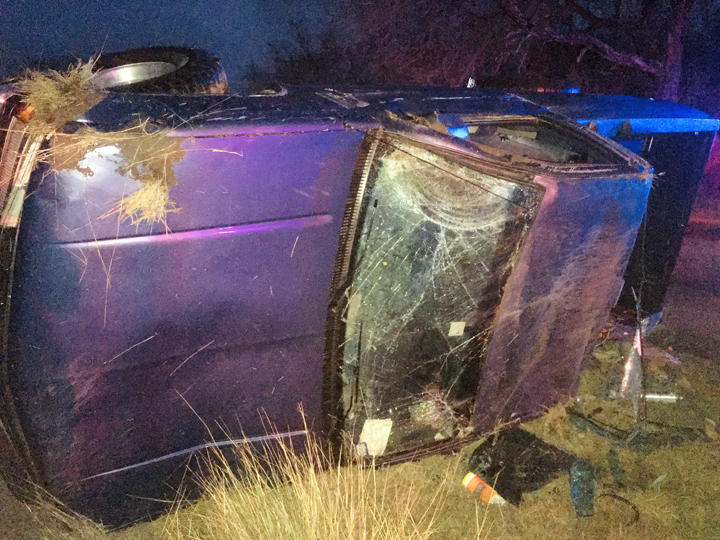 Sixteen-year-old Ander Eve Duncan was only a couple miles from her dad’s house when she lost control of her vehicle which rolled and landed on its side with her stuck inside. It happened as she was driving home from soccer practice and a cheer meeting at Medina Valley High School Wednesday, February 19 on Lower LaCoste Road (CR 4713) around 6:15 in the evening.
Her mother, Misty Eve Duncan, hopes that by sharing her daughter’s story that others will realize that seatbelts really do save lives, and it certainly saved Ander’s.
“Her seatbelt saved her life. There was no doubt in anyone’s mind,” said Mrs. Duncan. “The EMS, fire crew, sheriff’s deputies and state troopers all said if she had not had her seatbelt on she would have been thrown out of the truck.”

And the old adage that accidents often happen close to home, where you least expect them, sure rings true.
“There is a blind curve and someone was coming towards her as she rounded the corner. She swerved and overcorrected then rolled,” Duncan said. “There were two cars following her and they both stopped to help. Both drivers said she wasn’t going more than 35 mph because they were going that slow too. The weather was bad….roads were slick. The truck came to rest on the driver’s side. The people who stopped ran up to try to get her out. Her seatbelt had locked and she was disoriented. She didn’t know exactly what had happened but the truck was still running and she had a panic attack because she couldn’t get out. She was worried that the truck would catch on fire and she wouldn’t be able to get out.”
“Ander said she could feel the seatbelt lock when the truck lost control. She could feel everything in slow motion,” Duncan adds. “She saw the stuff inside the truck flying around and she couldn’t hold on to the steering wheel any more. She could see the trees, clouds and then the dirt. During the roll and when the truck finally stopped she couldn’t move from her seat because her seatbelt had locked. I’m not sure who exactly pulled her out. She isn’t either, but we’d like to say thank you to Castroville VFD, Castroville PD, EMS in Castroville, and State Troopers as well as the other people who stopped to help. People had stopped and put towels around the broken glass on the back window, so she wouldn’t get cut and they brought blankets and jackets from their cars to cover her because she was shaking in the truck.”
“I was still at the cheerleading meeting when it happened,” Duncan said. “I was talking with her cheer sponsor, when I got a phone call, then I saw a text message that said Ander had been in a rollover accident. I gasped and started to run out the door. My daughter Tessa was there too and she ran out the door with me. The person on the phone told me that my daughter had been in an accident. I asked where, and she gave me details, but all I heard was Lower LaCoste Road and I know the way Ander goes to her dad’s house. I asked if she was okay, the lady said she was, and I asked if I could talk to her. She said I needed to get there quickly. I could tell by the way she said it and the question I had just asked that I wasn’t going to able to talk to my daughter.”
“It took me about seven minutes to get there from the high school. She had a concussion, whiplash, a contusion on her shin, several deep cuts on her legs and a big cut on her left hand with road rash on her left hand. She also had some chest pain from the line of the seatbelt. But she was able to stand up and walk out of the ambulance. By the time they let her walk out of the ambulance it seemed like half the town was on the side of the road. Everyone had heard. My daughter Tessa was getting messages with pictures from the accident from before we had even shown up.”
Ander was still in shock and she was in pain, but the Duncan family is counting their blessings.

“We didn’t realize it till we got home but she had glass all over her. When she handed me her shoes and they had blood and glass inside of them, that’s when I finally broke down. I couldn’t imagine what people go through when the outcome is worse. I was so blessed to take my daughter home and be able to help her wash the blood and glass and dirt out of her hair. I helped her take her soccer pullover off. Dirt and pieces of glass fell out of the hood. She was still wearing her practice clothes from soccer,” Duncan said.
Ander is a straight A student, varsity soccer player, and the JV Cheerleading Captain.
Cheer leading tryouts are next week, and they aren’t sure how well Ander will be, “but I’m just so glad my daughter is alive. I can’t even imagine where I’d be right now, days after the accident if she had been severely injured or worse. We were blessed to be able to go home with our daughter safe that night.”
“If you never listen to anything I say ever again. Please hear this……Wear your seatbelt. Always. Wear your seatbelt and make your kids wear theirs. Every day, every time. If they see you do it, your kids will be more likely to do it without hesitation. The deputies, troopers, police, EMS and firefighters all said the same thing–Ander’s seatbelt saved her life today.”