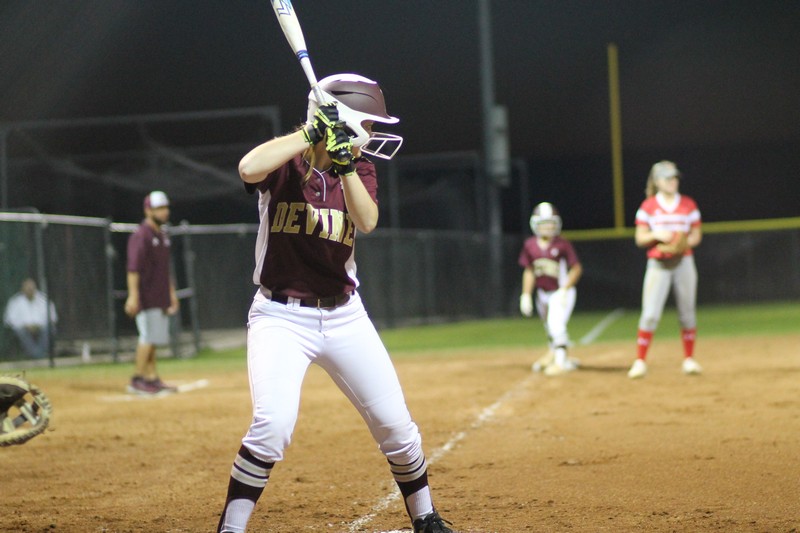 This past weekend in the Seguin Softball Tournament, the Arabians went 1-6 against some difficult teams. Playing two games a day for three days is rough on any team but the Arabians played hard in every game and did not let the other team win easily.
In their opening game against Highlands, the Arabians lost 2-12 but still managed to earn 5 hits off a tough pitcher.
Megan Runyan 1 run, 1 hit. Kendall Arche 1 run, 1 hit, 1 RBI. Halle Hagdorn 1 hit. Arieana Ramirez 1 hit. Pitcher Isabella Gutierrez 144 total pitches with 70 strikes.
They beat Victoria East 8-5 in their second game of the day and it was due to some defensive fieldwork from the Arabians. Victoria East hit the ball 11 times but could only cross homeplate 5 times. McClellen pitched 69 times with 52 strikes. Gutierrez hit a home run early in the bottom of the second which was a start to a 6 run inning by the Arabians.
Ortiz 2 runs. Runyan 1 run, 2 hits, 1 RBI. Hagdorn 2 runs, 1 hit, 1 RBI. A. Ramirez 1 run, 2 hits. Taylor 1 hit. McClellen 1 hit, 2 RBIs. Gutierrez 1 run, 1 hit, 1 RBI. Schneider 1 run, 1 hit.
The Arabians would lose their next four games of the tournament to Jourdanton 4-7, Edison 3-4, Eagle Pass 6-9, and Boerne 0-3.
Jourdanton stats: Ortiz 2 runs, 1 hit. Runyan 1 run, 3 hits. Arche 1 hit, 3 RBIs. A. Ramirez 1 hit, 1 RBI. Taylor 1 hit. Schneider 1 run. Pitcher McClellen 68 total pitches with 49 strikes.
Edison Stats: Ortiz 1 hit. Runyan 1 run, Arche 1 hit, 1 RBI. A. Ramirez 2 RBIs. McClellen 1 run, 1 hit. Schneider 1 run, 1 hit. Pitcher Gutierrez 83 total with 48 strikes.
Eagle Pass stats: Jessie Ramirez 2 runs, 2 hits. Gutierrez 1 hit. Schneider 2 runs, 1 hit, 2 RBIs. McClellen 1 hit. Hagdorn 1 home run, 3 RBIs. Taylor 1 run. Pitchers Schneider threw 75 total pitches with 40 strikes. Gutierrez threw 18 pitches with 11 strikes.
Boerne stats: no reported hits. Pitcher McClellen threw 63 total with 44 strikes.
“Although the outcome of the games were not all wins, I am proud of the girls for their fight and ability to handle everything that was thrown our way. We had to battle the weather, missing players, injuries, and illnesses the entire weekend. Not once did I hear a complaint or negative attitudes from the girls and that shows a lot about the character of these young ladies. We faced some tough 5A and 6A schools and competed with them well. We lost to Edison 4-3 in a tiebreaker, lost to Eagle Pass High 9-6, but played a good Victoria East team and beat them 8-5 just to name a few games. Our tournaments are done and we are one week away from opening district play vs. Hondo. We have two more games to get us ready for when the wins and loses count. We will not overlook any team and practice to play consistently at our highest ability level,” Coach Juan Gonzalez stated.
By Dicy Chambers
Sports Writer