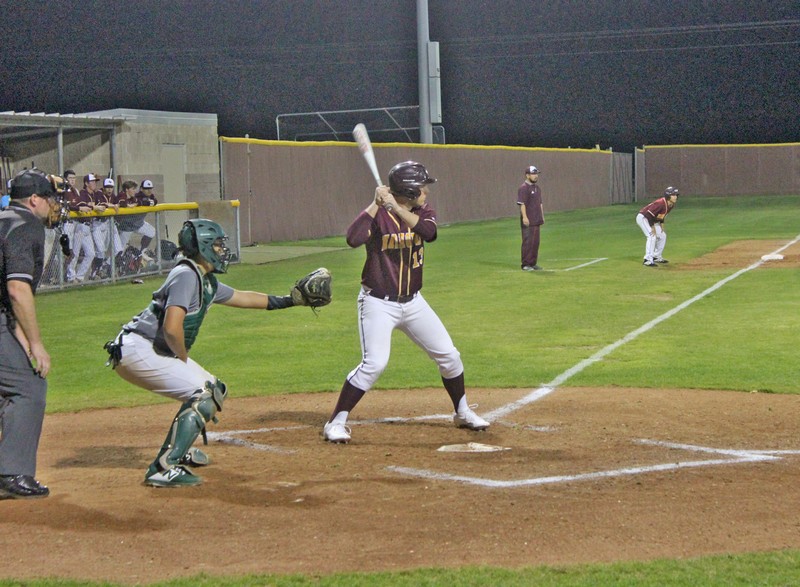 In the Cross the Creek Classic last weekend, the Warhorses faced four tough opponents and only won one of their four games. Despite the tough games, the Warhorses used the tournament to figure out who plays best where before district starts later this month.
In their first game against Ingleside, the Warhorses lost 2-6 and only had two hits by Newt Crouch and Dalton Kramer. Devine’s pitching staff only allowed Ingleside 8 hits. Gehrig Runyan threw 42 strikes in 72 pitches and Jacob Barron threw 14 strikes in 23 pitches. Isaiah Oropeza had 1 stolen base and 1 run. Crouch 2 stolen bases. Kramer 1 RBI. Justin Contreras 1 stolen base.
The game against Hallettsville was rougher than their first with Hallettsville winning 0-9. Devine did hold them to just a single run until the fifth inning when they broke the game open with a 6 run inning. Pitcher Truett Barron threw 65% strikes from the mound and Brady Harrell threw 7 strikes in 16 pitches.
Liberty Christian had to work hard against pitchers Oropeza and Harrell in their third game of the tournament bit won 3-7. Oropeza threw 50 strikes in 79 pitches and Harrell threw 3 of 3 in the last half of the seventh. Oropeza also had 1 RBI. Crouch 2 runs, 1 hit. Kramer 2 hits. Harrell 1 run, 3 hits, 1 RBI. Joseph Guajardo 1 hit.
Pleasanton was the last opponent the Warhorses faced and earned a much needed win at 7-2. Devine took the lead early in the bottom of the first and stopped Pleasanton from scoring until the top of the third. The Eagles had 4 hits but 7 errors and Devine capitalized on ever error. D. Kramer threw 33 strikes in 53 pitches, Crouch 34 strikes in 42 pitches. Chad Lawson 1 run. Crouch 2 runs. D. Kramer 1 run, 1 hit, 3 RBIs. Barron 1 run, 1 hit, 1 RBI. Eliseo Perez 1 run. Runyan 1 hit. Guajardo 1 hit. Clayton Brown 1 hit. Mason Burford 1 run, 1 hit.
“I feel that we played a very tough schedule. I didn’t think we competed very well against Ingleside as a whole. I thought we competed the rest of the games pretty good. Still have some areas of concern that we will fix before this next tournament. I thought our brightest spot of this tournament was our pitching. Our staff gave us a chance all weekend. Our bats definitely need to improve as we dipped down from the Marion tournament. Our kids know it and I know they will do what needs to be done to fix this. Defensively we had some uncharacteristic plays in both the outfield and the infield that will get fixed as well. We have one more tournament to find 9 to 10 guys I will go to war with come district time!!!!!” Coach George Villa
By Dicy Chambers
Sports Writer