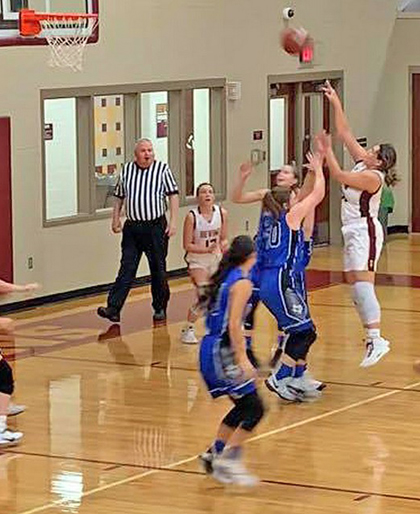 Falls City
With a full team of Arabians, Coach Jim Sessions faced Falls City in their first game of the season on November 14th. Down 11-20 at the end of the first, the Arabians never gave up and slowly closed the gap. They came within a basket but ran out of time before they could take the lead ending the game 50-52.
“It was good to get the season started on Thursday with the Falls City game. Although the outcome of the game was not what we had hoped it would be; this loss really showed us a great deal about our team. Despite getting down early the girls really fought hard to make a comeback in the second half. The effort was great throughout the night. The mistakes we made are definitely fixable and that is something that will come as we play together more throughout the year. In all, I saw several positive aspects of the game and I am very optimistic about the upcoming year.” Coach Jim Sessions
Team Free throw 55.6%, 13 assists, 20 steals, 35 fouls. Points: Macey Hein 12, Megan Runyan 7, Clarissa Zamorra 13, Ally Taylor 7, Janaee Wofford 4. Rebounds: Gabby Rodriguez 1, Lacey Shook 3, Hein 3, Kendall Marek 1, Runyan 5, Maddie Mata 4, Zamora 6, Taylor 6, Wofford 4. Steals: Shook 2, Hein 1, Runyan 3, Mata 6, Zamora 2, Taylor 1, Wofford 5. Blocks: Mata 1, Wofford 2. Q1 11-20, Q2 23-27, Q3 33-38, Q4 50-52.
Navarro
After the loss on the 14th, the Arabians faced Navarro on November 16th and it was a much different game. Playing more aggressive offense and smarter defense, the Arabians beat Navarro 55-35. With only shooting 55% inside the key, the Arabians made quick work of getting the rebounds and keeping possession of the ball. Navarro only outscored the Arabians in the final quarter. Q1 22-10, Q2 31-17, Q3 45-22, Q4 55-35.
“The girls showed a great deal of improvement going into the Navarro game. That improvement led to a solid win vs Navarro. I feel like we found a bit of our identity in the second half of the Falls City game and we carried that forward to the Navarro game. Our defensive pressure and intensity was a key to getting out to an early lead. I felt we did a much better job of valuing each possession in the game when playing against Navarro. That lead to more scoring opportunities and we were able to take advantage of that. The girls are becoming more comfortable playing together and they seem to be excited about the season. I really think this group has a chance to be a very good basketball team. I am super excited to see where things go this season.”
Team Free Throw 68.2, turnovers 22, fouls 24. Points: Gabby Rodriguez 2, Lacey Shook 2, Macey Hein 8, Kendall Marek 2, Megan Runyan 15, Maddie Mata 9, Clarissa Zamora 12, Ally Taylor 3, Janaee Wofford 2. Rebounds: Rodriguez 2, Shook 1, Hein 2, Marek 1, Runyan 4, Mata 4, Zamora 1, Taylor 3, Wofford 5. Steals: Rodriguez 1, Shook 5, Hein 2, Runyan 3, Mata 3, Zamora 1, Wofford 1. Blocks: Mata 1, Taylor 1, Wofford 1.
The Arabians will play in the Cole Tournament this weekend, at Medina Valley November 25th, and at home against La Vernia November 26th.
By Dicy Chambers
Sports Writer