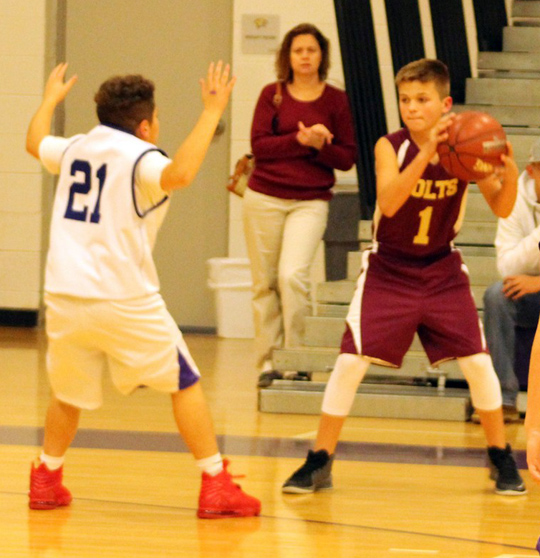 7th Gold Colts 2-1
The 7th Grade Gold Colts went 2-2 last week after playing 4 games in five days. Led by Coach Jacob Sanchez, the Colts faced Carrizo Springs, Medina Valley, Bandera, and Poteet between Thursday and Monday.
Thursday night was rough for the Colts in Carrizo Springs; they played hard but fell 7-12 after playing against a running clock. Josh Mills scored 1, Brook Poppe 2 and Edwin Belor 2 points.
In their first game of the Hondo tournament, the Colts got off to a rough start and fell behind. They continued to play hard each half bout could not catch up to Medina Valley and lost 24-33. Ayden Leal 5, Tony Saldivar 3, Julio Ortiz 3, Rey Quiroga 2, Josh Mills 1, Poppe 2, Belor 8.
That loss put them up against Bandera and the Colts pushed the game into overtime to win it 18-16. It was a lot of hard work but the Colts wanted the win more than Bandera and took every shot. Leal scored 4, Saldivar 5, Quiroga 2, Mills 3, Belor 1, Michael Girtz 3.
Monday night was a big win for the Gold Colts when they faced off against Poteet. Down 1-2 at the end of the first, the Colts put up 10 points in the second to take the lead 11-6 and they held on to that lead to win it 20-16. “The kids played hard all weekend but we did not get the results we were looking for.” Coach Jacob Sanchez
7th Maroon Colts beat Poteet
The 7th Grade Maroon Colts had a tough series of games over the past few days. Playing Carrizo Springs, Hondo, Medina Valley, and Poteet in five days was exhausting, but the Colts played hard every minute of each game. “There is a lot of room for improvement and they are getting better each game.” Coach Jacob Sanchez
Traveling to Carrizo Springs last Thursday, the Colts lost 17-26 but were able to learn a lot facing the tougher team. Logan Davis scored 4, Elijah Contreras 1, Brayden Reyes 2, Ruger Cote 2, Jaysen Ramirez 2, Matt Gomez 4, Tyler Pike 2.
Facing the Owls in the Hondo tournament was a fight from the first whistle that lasted until the end of over time with the Colts trailing 16-17. Contreras lead with 8 points, Jacob Rodriguez 2, Reyes 2, Cote 3, and Ramirez 1.
In the second game of the tournament, the Colts fell to Medina Valley 14-32. They worked hard against Medina Valley’s defense but could not get their shot to sink. Davis 1, Reyes 2, Ramirez 4 Gomez 1, Tyler Pike 4.
The highlight of the week was a well earned win over Poteet at 24-22. The Colts trailed 2-4 at the end of the first but tied the game up at 9 by the half. Poteet came out strong in the third to take the lead 15-13, but in the fourth, Devine proved to be the stronger team to win it 24-22.
The Colts will play their next game January 9th in Crystal City.
By Dicy Chambers
Sports Writer