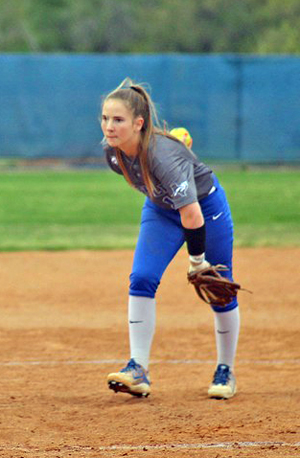 There is no “I” in team and the saying always turns into being true. One could not help but notice, one of the nine team members on the field last Friday at Lady Mustang Field as Natalia hosted Dilley in a crucial 30-3A battle.
Although the girls in blue remained a bit undisciplined versus a slower Dilley pitcher, they worked off the energy of their defense led by freshman pitcher Abi Woodson who had a stellar day with a season high 15 strike-outs.
Woodson held Dilley to two hits, as Natalia picked up a relatively close in score, but truly distanced 6-1 victory over the Lady Wolves.
“Our girls were prepared to take care of business this week vs Dilley and they brought the energy and the bats needed to secure the win,” Assistant Coach Tara Gonzales said.
Natalia’s bats were alive throughout, as they only had 2 strike-outs the entire night. The Lady Stangs attacked every other pitch in the game, but only managed six hits due to the fact they didn’t time the slower pitching out well.
Woodson surrendered her only two hits of the game in the 1st inning. The freshman adjusted, accounting for three out of her 15 Ks in the top of the 1st inning, despite Dilley scoring their lone run of the game.
Natalia responded with a strong 1st at bat. Natalia used a KK Lara single, a fielder’s choice put into play by Gabi Santoya and a few miscues to take a 2-1 lead.
Woodson continued to build up steam in the top of the 2nd, as she struck out three in a row.
Natalia added to their lead in the bottom of the 2nd. The Lady Stangs used a Mena Figueroa double and a Dez Perez single to take a 3-1 lead.
Two additional Ks in the top of the 3rd and one ground out to Santoya at 1st ended any hopes of a Dilley offensive explosion.
Natalia took control of this game in the bottom of the 3rd and this happened with two outs.
The Lady Stangs used a Woodson single, a Bryanna Perez single, a M. Figueroa HBP and a big double by Dez Perez to score in three huge runs allowing Natalia to take a 6-1 lead they would never surrender.
Natalia did strand a total of four runners on base, as Dilley stranded just one.
Woodson finished the impressive performance with the 15 Ks, allowing just two hits, 0 walks and one earned run.
“Abi took the win for us tonight with her 15 Ks as Dez came up big for us with the three run double,” Cortinas said.
At bat: Ally Chavana 0-2, Trista Vera 0-3, Taty Alvarado 0-3, Contreras 0-1, M.Figueroa 1-2-2runs scored, Lara 1-2-1run scored, B. Perez 1-3-1run scored, Woodson 1-2-1run scored, D. Perez 2-3-4RBIsm Santoya 0-2-2RBis-1run scored and Bivi Figueroa 0-1.
Defensive Put-Outs: Vera 13, Contreras 3, B.Figueroa 2, D. Perez 1, Santoya 1, M.Figueroa 1. Assists: Woodson 2, Contreras 1, B.Perez 1.
By Eric Smith