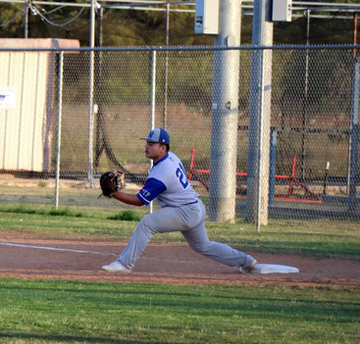 The Natalia Mustangs kept playoff hopes alive last Friday at Mustang Field. Natalia was able to out-hit the visiting Dilley Wolves 12-3 en route to a solid 10-0 6-inning run-rule victory.
“I was pleased with our overall performance and the effort from our young men,” Coach Jeff Terry said.
Natalia Mustang Jermiah Castro went the distance on the mound for the Stangs. He pitched 6.0, allowed three hits, walked 0 and struck out eight during the home win.
Castro set the tone on the mound in the top of the first, striking out two of three and forcing a line-out.
Natalia’s offense went to work in their first at bat. Natalia used an error put into play by Matt Contreras, a single by Castro, a fielder’s choice by Uriel Arellano and a single by Diego Zapata to take a 2-0 lead.
In the top of the 2nd, Castro accounted for two additional Ks. Dilley got one of their three hits in this inning, as Steiler had a double for the Wolves. Natalia finished the inning with a fly-out catch by Arellano.
The Stangs added to their lead in the bottom of the 2nd. Natalia rallied with two outs, as Contreras started things again putting a hard shot into play too hot to handle by Dilley (error). Natalia then used a Castro double and a Arellano single to give the Stangs a 4-0 lead.
The Mustangs went on to score three in the 4th and three in the 6th to run away with a solid 10-0 home victory over the Grey Wolves, completing their season sweep vs DHS.
At bat: Zapata 2-3-2RBIs-1run scored, Manuel Garcia 0-2, Castro 3-3-2RBIs-2runs scored, Joel Mendez 1-1-2runs scored, Contreras 0-3-2runs scored, AJ Felker 2-4-1RBI-1run scored, Matt Billalobos 0-2, Arellano 2-4-1RBI-1run scored, Fabian Ruiz 1-3-2RBIs-1run scored and Gomez 1-4-1RBI.
Defensive Put-Outs: Zapata 8, Arellano 5, Castro 1, Contreras 1, Gavin Martinez 1, Felker 1, Ruiz 1. Assists: Contreras 4.
By Eric Smith