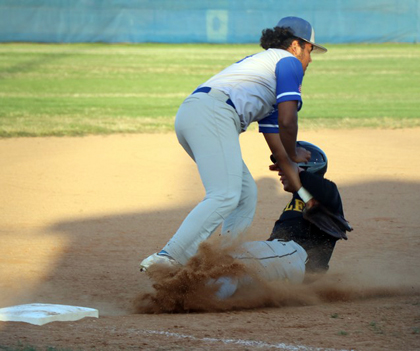 After watching the Natalia Mustangs have too many miscues to be successful during a first round battle versus the Lytle Pirates, no one was sure how the second round battle would go Monday night at LHS.
The Natalia Mustangs came out with a chip on their shoulder, as the staff and players knew they were better than they showed during a 13-2 loss just weeks ago.
Natalia out-hit the Black and Gold 13-10 and nearly up-set the Pirates in an 8-inning battle Monday night that saw Lytle score the winning run on an interference call by the umpire.
“We had our chances, but I really like the way our boys battled,” Coach Jeff Terry said.
Diego Zapata got the start on the mound for the Stangs. He pitched 4.2 innings, allowed seven hits, walked four, struck out five. Manuel Garcia rounded out the game pitching 2.1, allowing three hits, walking 0 and striking out 1.
Natalia got things rolling in their opening at bat, as they utilized a Matt Contreras base on balls, a single by Jermiah Castro, a stolen base and a Garcia single to take the early 1-0 lead.
Lytle tied the game in their first at bat, as Ayala got on base courtesy of an error before scoring on a DeLeon double.
The next offensive production came in the top of the 3rd for Natalia. Castro who was hot at the plate, singled and eventually scored courtesy of a ground-out by Uriel Arellano and a single by Garcia.
The Pirates responded in the see-saw rival battle, as Ayala got on courtesy of being hit by a pitch. He scored thanks to a DeLeon double to tie the game again 2-2.
After a scoreless 4th inning, the Pirates took the lead in the bottom of the 5th. Lytle used a Guerrero double, a HBP by Garcia, an error put into play by Flores and a few miscues to score two runs allowing Lytle to take a 4-2 lead.
Natalia tied the game, forcing extra innings in the top of the 7th. Natalia used a base on balls by Contreras, a double by Castro and a single by Arellano giving the traveling fans wearing blue and white plenty to cheer about.
In the bottom of the 7th, Natalia used a 5-3 defensive play, a 1-3 defensive play and a 6-3 defensive play to shut-down Lytle 1-2-3 forcing the 8th inning.
Natalia started the 8th inning with a single by Jermiah Gomez. He would score, thanks to a passed ball, and a single by Castro to give Natalia a 5-4 lead. Natalia did strand two runners on base in the inning and a total of eight runners on the game which proved costly when all was said and done.
Lytle was able to score the tying run, thanks to a Ramos single, a stolen base, a fielder’s choice by Esquibel and a single by Ayala. Lytle scored the winning run on an interference call by the umpire as Natalia’s 3rd baseman and the runner made contact on an effort play allowing Lytle to win 6-5 in a game full of effort by both squads.
Zapata finished the game allowing four runs, two of which were earned as Garcia allowed two runs, both of which were earned in the game.
At bat: Zapata 2-4-1RBI, Garcia 2-3-1RBI, Austin Guzman 0-1, Castro 4-5-2RBIs-1runs scored, Contreras 0-2-2runs scored, AJ Felker 0-2, Matt Billalobos 0-4, Arellano 2-4-1RBI, Ruiz 2-4 and Gomez 1-3-1run scored.
Defensive Put-Outs: Arfellano 7, Garcia 6, Zapata 2, Castro 2, Billalobos 2, Gomez 1, Felker 1. Assists: Gomez 4, Castro 3, Garcia 2, Zapata 1.
Upcoming Games
Natalia will host the district leading Jourdanton Indians on Thursday, April 18th at home at 4:30 and 7:00 p.m. as 30-3A action continues.
On Tuesday, April 23rd Natalia will welcome Cotulla to town for their final 30-3A battle of the season. With the sweep versus Dilley, Natalia is most likely playoff bound. Snagging a win in one of their final two games of the regular season couldn’t hurt and might allow a tie for 3rd seed in 30-3A.
By Eric Smith