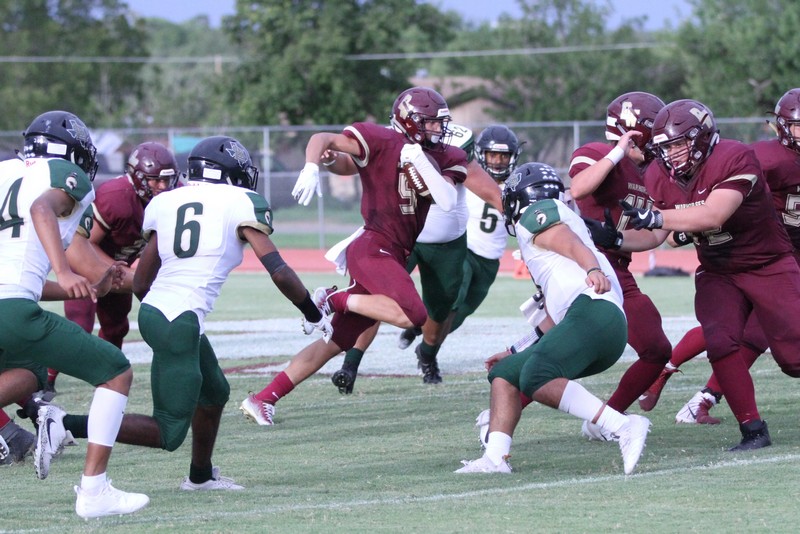 Senior quarterback Chad Lawson put on a show against the Southwest Legacy Titans Friday night at Warhorse Stadium. Lawson completed 10 of 14 passes for 202 yards and three touchdowns without throwing an interception. He also averaged over 10-yards a carry as he rushed 10 times for 102 yards. Not counted in those passing or rushing statistics are two additional two-point conversion runs and a two-point conversion pass to senior wide out Isaiah Oropeza. Devine overcame a 13-point deficit to beat Legacy 30-27 and improve their record to 2-1 on the season.
“Chad had a great night leading the offense,” said Head Coach Paul Gomez. “He made some great decisions and delivered the ball to the open receivers. He also did a great job running the ball.”
Lawson’s stats are gaudy but he fully understands that those statistics would not have been possible without his fellow Warhorses equally impressive contributions.
“Our receivers did a good job of getting open and making plays in the open field,” stated Lawson. “They also made some good catches on important plays that helped us win the game. Our offensive line made a few holes that opened up running lanes that allowed me to get some big gains. Over half of my rushing yards actually happened on a busted play by the defense in which they allowed me to cut back against the grain for a big gain. That play gave us a much needed boost.”
Senior Guido Zapata had another solid outing catching four passes for 112 yards and two touchdowns and rushing nine times for 72 yards. Zapata’s 20-yard run midway through the second quarter led to Donavon Camacho’s 54-yard touchdown reception while a 49-yard completion set up his own 9-yard touchdown reception just before halftime. That Zapata touchdown gave the Horses their first lead of the night at 16-13.
“It was good coming up big to help my team secure the win,” Guido stated. “It was exciting for me especially after being down 13-0 early in the game. Our team really showed some heart to come back and take a 16-13 lead at the half.”
For most of the third quarter and into the fourth, the rain started to fall. Slippery conditions in the second half slowed or caused some slippage amongst all ball carriers for the remainder of the game.
Southwest Legacy’s Jorge Pineda had quite a game for the Titans. He had three touchdown receptions with his third score of the game on a 60-yard pass play that provided his team a temporary 19-13 lead with 10:15 remaining in the third quarter.
On the Horses ensuing possession, Lawson used his legs to get most of his 102 yards rushing on the night. Facing a 3rd and 10 to go, Lawson rolled to his left while looking for an open receiver. Instead of forcing a pass into tight coverage, Chad tucked the ball under his armpit and headed up the left sideline near the Legacy bench.
Lawson’s run from the Devine 25 to the Legacy 27 swallowed up 48 yards in a hurry. It was Macho-Time from then on. After converting to running back after starting the season and Somerset game at receiver, Camacho rushed 25 times for 92 yards. His 11-yard touchdown run came on his fifth consecutive rushing attempt after Lawson’s long run. That touchdown gave the Warhorses the lead for good at 22-19. Camacho’s stock continues to rise after replacing Grant Collins in that Bulldog ballgame almost two weeks ago.
‘It was a tough night for the team due to injuries from earlier,” stated Camacho. “I am glad I got the opportunity to do my part and help get the victory for my brothers.”
Devine added one more score with 8:49 left in the game. A 17-yard run by Zapata off an option pitch from Lawson followed by Lawson’s own 12-yard run for a first down set up Zapata’s 14-yard touchdown catch in the south end zone of Warhorse Stadium. That score bumped Devine’s lead to 30-19.
Although Legacy quickly answered to cut the deficit to 30-27, the play of the game happened on Legacy’s last possession of the game. Facing a 4th and 18, the Legacy running back was forced out of bounds on the Warhorse sideline after a 2-yard gain. The Titans were called for a block in the back while the play was live, however the Warhorses were called for a late hit out of bounds in a dead-ball situation. Coach Gomez declined the Titan penalty, the officials marked off 15 yards against the Warhorses, but Devine had gained possession during the bizarre play and basically ran out the clock to secure the win.
Offense busts out
Devine’s 468 yards total offense was the most accumulated since gaining 483 against Lytle last season in a 70-34 win. The running game netted 266 yards, while the arm of Lawson and the hands of four different receivers supplied the other 202.
The Warhorses also moved the chains 18 times, twice the number of Legacy.
Dirty laundry
Coach Gomez laments the fact that his team is committing too many penalties. Penalties hurt team’s chances for offensive success, which is a known fact. They can ruin offensive drives before they have a chance to get going and they can stall out drives close to the end zone. Devine’s nine penalties for 75 yards surely prevented at least one more scoring opportunity for the Warhorses.
Scoring summary
SWL—Jorge Pineda 56-yard pass from Adrian Rangel (Javier Lira PAT), 8:37, 2nd.
SWL—Pineda 39-yard run (PAT failed), 3:17, 2nd.
DEV—Donavon Camacho 54-yard pass from Lawson (Isaiah Oropeza pass from Lawson 2-pt conv.) 2:16, 2nd.
DEV—Guido Zapata 9-yard pass from Chad Lawson, (Lawson 2-pt run), :12, 2nd.
DEV—Camacho 11-yard run (2pt. conv. Failed), 5:15, 3rd.
SWL—Pineda 60-yard pass from Rangel (PAT failed), 10:27, 3rd.
DEV—Zapata 14-yard pass from Lawson (Lawson 2-pt run), 8:49, 4th.
SWL—Marcus Cantu 2-yard run (Damien Hernandez 2-pt run), 8:32, 4th.
Up next
Devine travels to Pleasanton to take on the 3-0 Eagles. Kickoff is set for 7:30pm.
By Jerel Beaty
Staff Writer