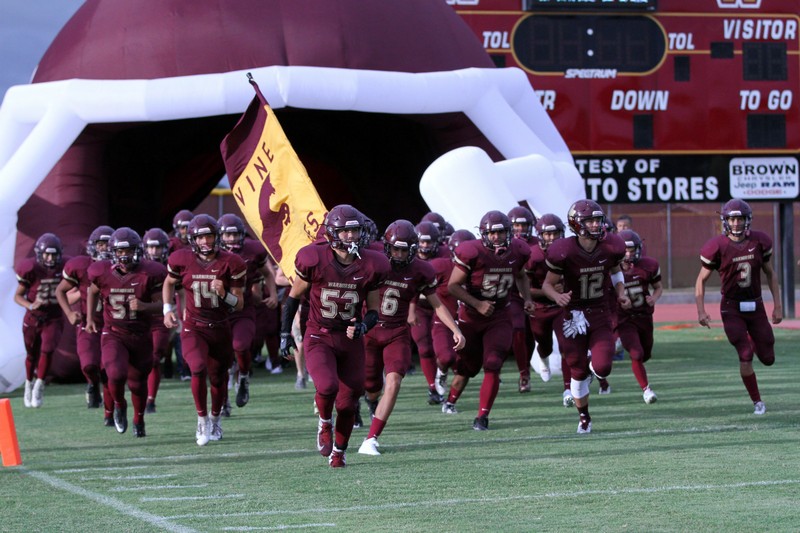 Devine faces their first passing-oriented test of the season when the Pleasanton Eagles descend upon Warhorse Stadium Friday night. Led by reigning District MVP and quarterback Johnny Zamora, he, along with wide receiver Dalton Hobbs have the Eagles looking to throw early and often against the Warhorse secondary.
In the 2017 season, Zamora threw for 2,631 yards and 30 touchdowns. This season, he has completed 61 of 93 for 1,061 yards and 11 touchdowns. More impressive, he has yet to throw an interception. If the Eagles go two rounds deep into the state playoffs as they did a year ago, Zamora’s projected totals are 244 of 372 for 4,244 yards and 44 scores. Wow.
Hobbs is Zamora’s favorite threat. Last year, Hobbs accounted for 792 yards on only 31 receptions. He is currently sitting on 22.1 yards per catch on 27 receptions for 597 yards. He has also hauled in six of Zamora’s eleven touchdown passes.
When the Eagles go to their ground game, running back Daniel Valdez handles most of the workload. This season, Valadez has rushed for 106 yards on 25 carries.
Pleasanton’s second year head coach Stephen Liska and his Eagles are projected to finish 3rd in District 15-4A DI behind coach’s pick Boerne as the district’s champion and La Vernia, who is picked second. With four of five teams making the playoffs, Pleasanton has to edge out Beeville Jones and/or Gonzales to get a bid into the bi-district round.
Devine Head Coach Paul Gomez had this to say about the matchup against the Eagles. “Pleasanton is an offensive scoring machine. Senior quarterback Johnny Zamora is the best quarterback that will go against and his receiving core are good as well.
Zamora throws with great accuracy and does a good job reading coverages. He also has great scrambling abilities with his speed. He has a great receiver in #80 Jr. Dalton Hobbs. He is a tall, big receiver with great hands. Previous teams have tried to double-cover him but he always manages to make plays.
Cole Weichring, #17, is another tall, big receiver that lines up on the other side of Hobbs. Cole also has good hands and has big play potential. At the slots you have #7 Jesus Ibarra and #8 Nathaniel Acevedo are good slot receivers that can find the open area and make big catches. #13 Riley Torres also plays slot for them and can make some plays.
Offensively, Pleasanton will throw the ball about 80% of the time even though they also have some good running backs in #3 Jr. Daniel Valadez and #4 Fr. Joel Arevalo. Valadez and Arevalo are good-sized backs with good vision and run hard. Their offensive line is big and athletic and they work well as a unit whether passing or running the football.
Defensively, they base out of the 3-4 defense and really do a good job in playing assignment football. Their TNT’s are big and athletic and their inside linebackers are very aggressive. They have good cover personnel in the back end and do a good job with their scheme.
Coach Liska and his staff do a great job and will have them ready to go. They are undefeated and playing good football coming into their fourth game of the season. It will definitely be a great challenge for us this week.
Our team will be ready and we will put them in the best situations to succeed. Our goal in pre-district games is to play good teams that test us. Good teams help bring your best. I have no doubt that we will rise up and play well.
We are excited to get this week going and get better. These kids are having fun competing their tails off! They are definitely fun to coach! It is all about the team and not about individuals; that makes a big difference. I hope that the weather will cooperate this week and we can get to work. We look forward to having a good week of practice.”
Kickoff is currently set for 7:30pm.
By Jerel Beaty
Staff Writer