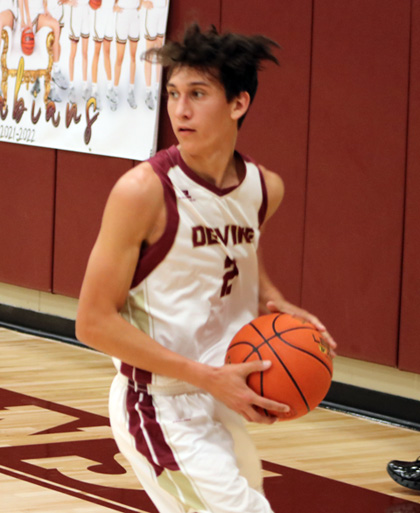 In their only game last week, the Warhorses took on the Somerset Bulldogs on February 1st. This was their fifth district game and Devine is 1-4. They are sitting in last place tied with Fox Tech. The Warhorses will play Young Men’s Leadership Academy on February 8th, Brooks Academy on February 8th and then finish district off February 15th at Fox Tech.
Facing the state ranked team, Devine came out strong, but the Bulldogs forced them into mistakes. Down 5-27 at the end of the first, Devine’s second quarter was much of the same. They added 7 points to the board but the Bulldogs added 25 to end the half 12-52.
The Warhorses stepped up in the third quarter. They held the Bulldogs to just 10 points in the third but only scored 5 of their own. Devine’s points came from a three-pointer and a jump shot from Chris Hanson.
In the fourth quarter, 7 of the teams 12 points came from free-throws. Jordon Roberts and Isaiah Morin each sank two while Hanson had three. Hanson also earned another 5 points in the fourth and led the team with 18 points.
“Somerset did a great job pressuring our guards and preventing us from executing our offense. We made them go deeper in their offense than last time, but they still made shots. They are a very talented and aggressive team. We have improved our free throw shooting the past two games and that is pleasing to see,” added Coach Even Eads.
Jordon Roberts 2 points. Sage Cruz 6 rebounds, 2 assists. Caden Hanson 18 points, 2 rebounds, 2 steals. Isaiah Morin 2 points, 3 rebounds, 1 assist, 1 steal. Eli Contreras 1 rebound, 1 assist, 1 steal. Chris Ortiz 2 rebounds. Marcus Espinosa 5 rebounds, 1 steal. Peyton Carr 6 points, 7 rebounds. Xavier Contreras 1 point. Q1 5-27, Q2 12-52, Q3 17-62, Q4 29-75. FTP 83%.
By Dicy Chambers
Sports Writer