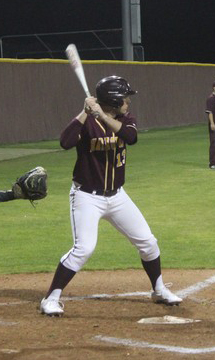 In their last pre-season game, the Warhorses had to work hard to come from behind in the sixth to beat Lytle 11-7. The game started out with the teams matching each other run for run until the fifth when the Pirates outscored the Warhorses 4-2 for the lead.
Top of the sixth and down two runs, the Warhorses had to work hard to get to the bases. First up was Joey Seguin who hit a single followed by a strike out by Blaine Miller. Isaiah Oropeza hit a single to shortstop and with Joseph Guajardo at bat, both Seguin and Oropeza steal bases and then Seguin runs home after Guajardo hit a fly ball to left field. Oropeza scores on a wild pitch and Guajardo steals second. Dalton Kramer hit a single to shortstop. Newt Crouch is hit by a pitch and loads the bases. Chad Lawson hit a sacrifice fly ball to center and Guajardo scores. Third out came when Brady Harrell ground out to the first baseman.
Bottom of the sixth was a quick three outs for Lytle with each hit being an out. Ralph Rios was first off and walked to bring up Seguin who singled on a bunt. Miller hit a pop fly and that was caught for the first out. Eliseo Perez (who came in for Rios) was caught stealing third for the second out. Oropeza singled to center. Guajardo singled to third and Seguin crossed home. Kramer walks and bases are loaded with Guajardo on second and Oropeza on third. Crouch singled to center and Oropeza scored. Guajardo scored the last run of the game on an error by an outfielder. Devine made quick work of Lytle in the bottom half of the inning and the game ended 11-7.
Oropeza 2 runs, 2 hits. Guajardo 4 runs, 3 hits, 2 RBIs. Kramer 2 runs, 3 hits. Crouch 3 hits, 4 RBIs. Lawson 1 run, 2 hits, 2 RBIs. Harrell 1 hit, 1 RBI. Seguin 2 runs. Miller 1 hit. Pitchers Oropeza 30 strikes in 64 pitches, Crouch 13 strikes in 19 pitches, and Kramer 39 strikes in 65 pitches.
The Warhorses started district last night against Carrizo Springs and will play in Crystal City Friday night, in Pearsall Tuesday, and then at home Friday, March 29th against C.C. Winn from Eagle Pass.
By Dicy Chambers
Sports Writer