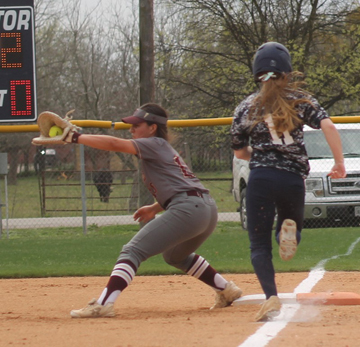 The Arabians pulled out a win in the last inning to beat Hondo 6-5 in their first district game of the season. They ended pre-season 8-13 and competed in three tournaments in order to get ready for district and then playoffs.
“If one was to look at the box score they would ask how did Devine win that game with 5 hits and 10 errors compared to Hondo’s 7 hits and 2 errors. All I have to say is that the Arabians wanted it more. The offense, led by Sr. Right Fielder Kendall Arche, came up with some very timely hitting with runners on. Arche was 2-4 with 4 RBIs. Julie Ortiz, Megan Runyan, and Mackenzie Schneider each had a hit and accounted for 4 of the 6 runs. Mackenzie McClellan did a great job for us in the circle going seven innings giving up five runs off seven hits, 1 walk, and 3 strike outs. McLellan pitched a great game, and even though our defense struggled she never got frustrated and just kept pitching.
I am very proud of the girls for competing the entire game and not pointing fingers and putting blame on one or two players. Teammates are to make each other better and pick each other up during rough times, and that’s what these girls did. Your Devine Arabians are 1-0 in district play and will continue to work hard towards a District Championship!” said Coach Juan Gonzalez.
In the bottom of the third, Hondo may have thought they won when they scored 5 runs in the inning but Devine never gave up and continued to fight. The Arabians would add 2 more runs in the fifth but it was in the top of the seventh that the Arabians pulled it together and earned the two runs they needed for the win.
With two outs, Julie Ortiz hit a single to right and then tied the game when Arche hit a double to left field. Arche then crossed home after Jessie Ramirez hit a ground ball and the Hondo shortstop had an error. This won the game for the Arabians, as the Owls were unable to make it to base in the bottom of the seventh with a strike out and two pop outs to Allison Taylor and Ortiz.
Jeanette Rios 1 run. Ortiz 2 runs, 1 hit. Arche 1 run, 2 hits, 4 RBIs. Ramirez 1 RBI. Schneider 1 run, 1 hit. Runyan 1 run, 1 hit. Pitcher McClellen threw 82 strikes in 115 pitches.
The Arabians will play in Crystal City Friday night, in Pearsall Tuesday, and then at home against Hondo Tuesday, April 2nd.
By Dicy Chambers
Sports Writer