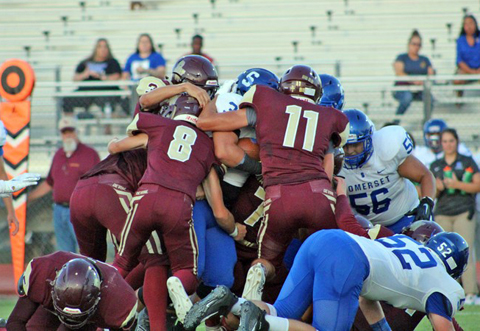 Somerset’s scatback Hunter Hernandez eluded many defenders, running for 167 yards on 24 carries.
“I told our defense from day one that we would have to tackle well and swarm to the football against these running backs. Our kids were in the right position; we just did not tackle well,” Warhorse Defensive Coordinator George Villa commented.
Other than tackling, another factor played into some of Devine’s problems on the defensive side of the ball. On several occasions throughout the game, misalignment issues plagued the Warhorses. Shifting late at times gave Somerset offensive linemen the advantage on clearing pathways for Bulldog running backs.
According to Coach Villa, do not look for mistakes such as these to repeat themselves.
“I promise that this week, we will get lined up and will be better tacklers!”
Head Coach Paul Gomez echoed many of those same sentiments.
“I know we will tackle more this week in practice and harp on fundamentals and our defense will respond. Coach Villa and the defensive staff will get them going. We let some guys loose on some important third down plays and that just cannot happen. We need to have a better week of practice in all phases of the game.”
Special Teams
Devine Special Team Coordinator Scott Taylor addressed the good and not so good from his unit’s Friday night effort against the Somerset Bulldogs at Warhorse Stadium. Warhorse Sergio Martinez recovered a squibbed kick to start the second half of play to ignite Devine temporarily. That recovery eventually led to a Devine touchdown.
Isaiah Oropeza contributed to big plays for the Warhorses. First, Oropeza had a nice kickoff return to set up a score. He also recovered a muffed punt return attempt by the Bulldogs.
“Special teams were just as up and down as the rest of the game Friday,” Taylor stated. “Miscues included shanked punts, kickoffs out of bounds, and two missed extra points. These issues will all be addressed and hopefully corrected by our next game.”
Head Coach Paul Gomez also addressed some special team’s issues.
“Our kicking game has got to get better. Missing extra points, kicking the ball out of bounds and not punting the ball well really hurt us. We gave them great field position all night. We have to get better because in big games special teams can win or lose the game.”
By Jerel Beaty
Staff Writer