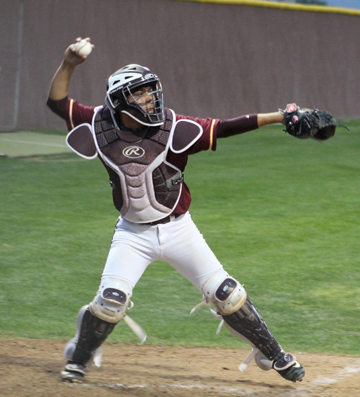 The game started off slow with only Devine scoring one run in the first six innings but in the top of the seventh, the Warhorses added six more runs to their shut out win over Crystal City on Friday, March 22nd.
The first Devine run came in the top of the second inning when Brady Harrell scored after Ralph Rios singled to left. The teams traded outs until the top of the sixth inning when Justin Contreras scored on a passed ball and then Newt Crouch hit a triple to bring home Isaiah Oropeza and Dalton Kramer. Harrell would hit a single to bring home Devine’s fifth run by Crouch. Truett Barron hit a sacrifice fly but made it to base on an error. Rios hit a double to left and Xsavior Martinez (running for Barron) crosses home. With Chad Lawson at bat, Rios advanced to third on a wild pitch and then home when Lawson hot a single to shortstop. The game ended 7-0 with another district win for Devine.
Crouch threw 17 strikes in 25 pitches and Gehrig Runyan threw 49 strikes in 88 pitches. Oropeza 1 run, 1 hit. Kramer 1 run, 2 hits. Crouch 1 run, 2 hits, 2 RBIs. Harrell 1 run, 1 hit, 1 RBI. Martinez 1 run. Rios 1 run, 3 hits, 2 RBIs. Lawson 1 hit, 1 RBI. Contreras 1 run, 1 hit.
The Warhorses are 2-0 in district and 11-5 overall. They will play C.C. Winn in a non-district game this Friday night and then Hondo at home on Tuesday, April 2nd followed by Carrizo Springs on April 5th there.
By Dicy Chambers
Sports Writer