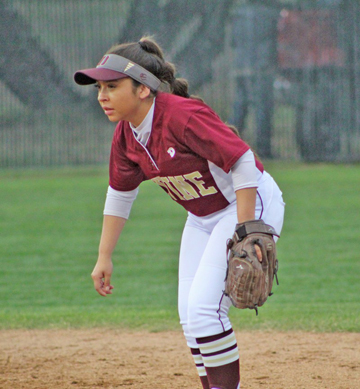 Carrizo Springs had a hard time getting past Devine’s defense on March 19th. They earned 8 hits but only made it home twice in the 9-2 Devine victory. “The team played well in all facets of the game. Pitcher Mackenzie McLellan did a great job, our defense made the routine plays, and our bats showed up at the plate. We’re starting to play some good softball and it couldn’t have come at a better time at the beginning of district play,” state Coach Juan Gonzalez.
The Arabians were able to score in 4 of their 6 innings at bat. They opened with two runs in the first inning, with a walk from Jeanette Rios, a single from Julie Ortiz, and a walk from Kendall Arche. Jessie Ramirez hit a double into left allowing Rios to run home but the play also earned 2 outs. Then with Arche on second and Allison Taylor on first, Mackenzie Schneider hit to center and Arche scored. The inning ended next play 2-0. Second inning, 2 outs, and Dawn Morris steals third and then scores while Ortiz is at bat. Third inning, J. Ramirez doubled to center followed by a fly ball from Taylor and J. Ramirez scored. Janae Wofford came in for Taylor and Schneider tripled to bring home Wofford. With Schneider on third, Halle Hagdorn singled and Schneider would score the last run of the inning 6-1. Bottom of the sixth, Rios on third and Arche on first, J. Ramirez hit a strong double past first and Rios ran home. Arche was able to score from third on a wild pitch and then Taylor hit a line drive double to bring home J. Ramirez. Carrizo Springs would score one more run in the top of the seventh but Devine won 9-2
Rios 2 runs, 1 hit, 1 stolen base. Ortiz 1 hit, 1 stolen base. Arche 2 runs. Taylor 2 hits, 1 RBI. J. Ramirez 2 runs, 2 hits, 2 RBIs. Schneider 1 run, 2 hits, 2 RBIs. Arieana Ramirez 1 hit. Hagdorn 2 hits, 1 RBI. Morris 1 run, 1 stolen base. Megan Runyan 1 stolen base. Wofford 1 run. Mackenzie McClellen threw 64 strikes in 96 pitches.
By Dicy Chambers
Sports Writer