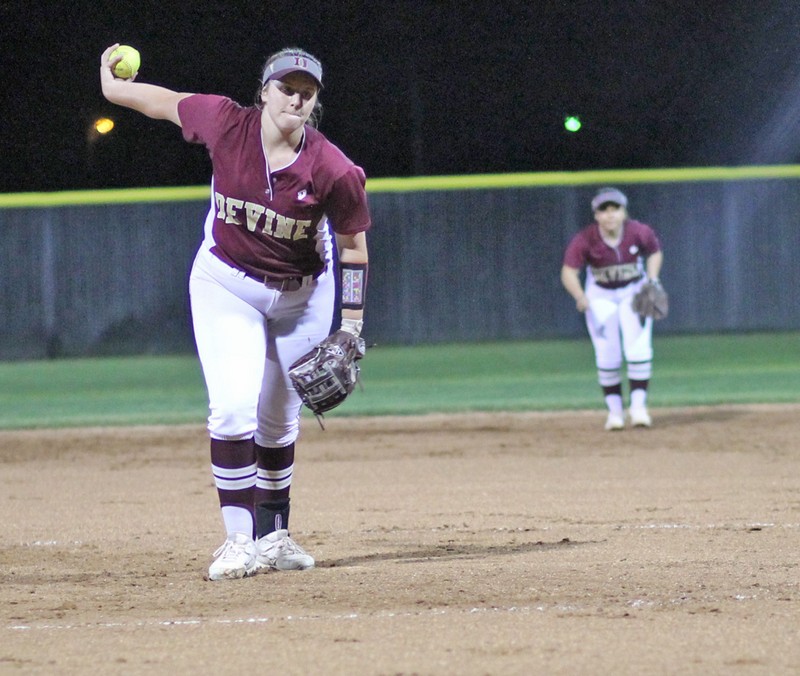 In a home game on February 26th against Fredericksburg, the Arabians scored first and then fell behind until a 4 run inning brought them back to life. Coach Juan Gonzalez and his team had 12 hits in the seven innings including a home run from Jessie Ramirez. The Arabians won 9-5 and have a 7-6 record after this Tuesday night game.
Down 3-4, Devine worked hard in the bottom of the fourth starting with a single from Mackenzie Schneider to get on base. Two outs later and Megan Runyan hits a single to right field and Schneider scores tying the game at 4. Jeanette Rios walks and Runyan is on third. Julie Ortiz singles allowing Runyan to score. With two still on bases, Kendall Arche hits a double to deep center field and Rios and Ortiz score. The inning ends 7-4.
Fredericksburg would score one more run in the top of the fifth and Devine sealed the win with two more runs in the bottom of the sixth. It was a great game with only 2 reported errors.
Rios 3 runs, 2 hits, 1 RBI. Ortiz 2 runs, 2 hits, 1 RBI. Arche 1 hit. Ramirez 1 run, 2 hits, 2 RBIs. Schneider 1 run, 1 hit, Halle Hagdorn 1 hit. Allison Taylor 1 hit. Megan Runyan 2 runs, 2 hits, 1 RBI. Pitcher Mackenzie McClellan threw 113 total pitches with 71 total strikes and only allowing 6 hits.
By Dicy Chambers
Sports Writer