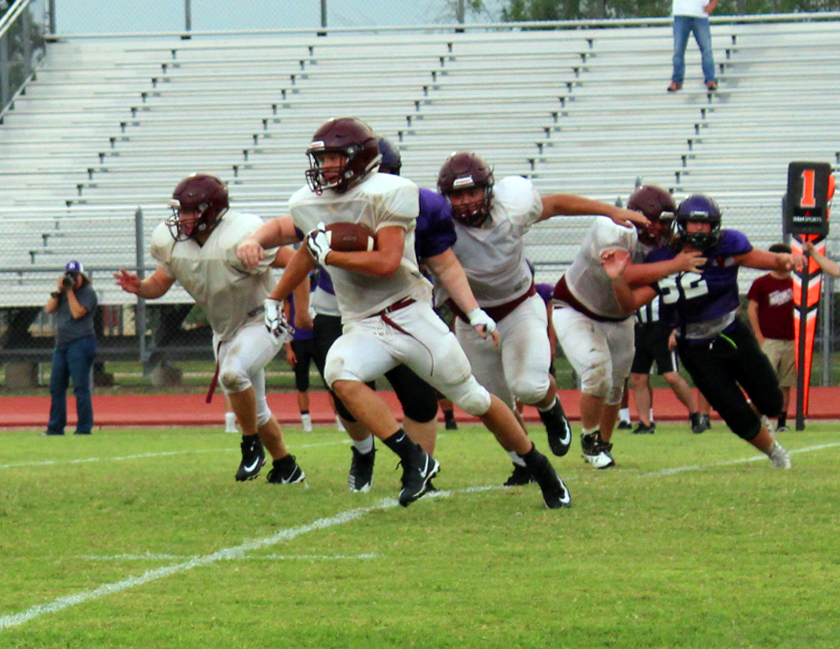 The Devine Warhorse varsity team held a talented Navarro offense somewhat in check during last Thursday night’s scrimmage at Warhorse Stadium. Navarro scored one touchdown in the combined 25 offensive plays, one touchdown during the live quarter, and kicked a field goal in the overtime session to get three scores on the night, which was a vast improvement over last year’s scrimmage.
“Our defense made some really good reads and had a lot of tackles at or near the line of scrimmage,” stated Head Coach Paul Gomez. “Even though Navarro did score a couple of times on us, I thought our overall focus and execution on the defensive side of the ball was better than average.”
“Offensively, we ran some wrong routes and dropped some passes that should have been caught. Those balls will be completions as the season rolls along. We had some miscommunication in our blocking game, but the kids are learning a new scheme so I expect that to improve as well.”
The Warhorses travel to Boerne for both teams’ season opener Friday, September 1. Kickoff is set for 7:30pm.
Game broadcast
All fans are encouraged to make the trip to Boerne to catch the game live. If you are not able to do so, you can listen to the game on www.audiosportsonline.net or by downloading the Tunein app on your mobile device. Either method you choose, once logged in, follow the prompts.
Game video highlights
Or watch the game video highlights on The Devine News you tube channel later as well.
By Jerel Beaty
Staff Writer