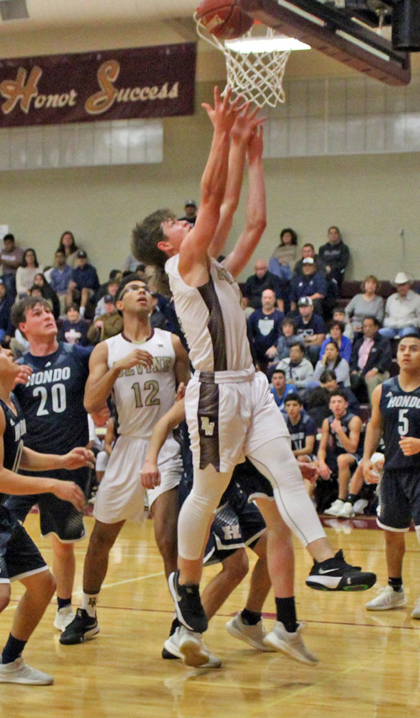 Hondo
It was an energetic crowd on Tuesday January 22nd when the Warhorses hosted the Hondo Owls in their first district meeting of the year. Both sides needed the win and fought hard for every point. Devine was down 13-16 at the end of the first quarter and Hondo was able to keep that lead by the end of the half at 25-31. Devine could not close the gap in the third quarter and slowly the Owls’ lead grew. The game ended 60-77 with both sides of the crowd cheering every time their teams scored.
“Tough loss. We need to regroup and get ready for Carrizo Springs; this is a very important game to get back into the district race,” stated Coach Paul Wells.
Cash Walker led with 18 points, followed by Leonard Pompa 15, Justin Contreras 14, Brady Cardenas 9, and Dalton Kramer and Sergio Martinez with 2 each.
Carrizo Springs
Traveling to Carrizo Springs on Friday night, the Varsity Warhorses came home with a big win over the Wildcats. Recovering from a tough loss to Hondo, the Warhorses came out aggressive and in control of the game. Leading 11-8 at the end of the first quarter, they held the Wildcats to just 2 points in the second quarter and added 19 points to their score. Carrizo Springs fought back in the second half but could not get past the strong Warhorse defense that held them to just 20 points in the second half. The Warhorses won 66-30.
“Big win on the road. We put 4 quarters of good basketball together,” said Coach Wells.
Cash Walker scored 15 points, Justin Contreras 13, Leonard Pompa 10, Kam Adams 8, Brady Cardenas 7, Sergio Martinez 6, Mason Burford 4, and Dalton Kramer 3.
The Warhorses are now 15-11 overall and 2-2 in district. They will face Pearsall Friday night, Hondo February 6th, and then Carrizo Springs on February 12th. All three games are on the road.
By Dicy Chambers
Sports Writer