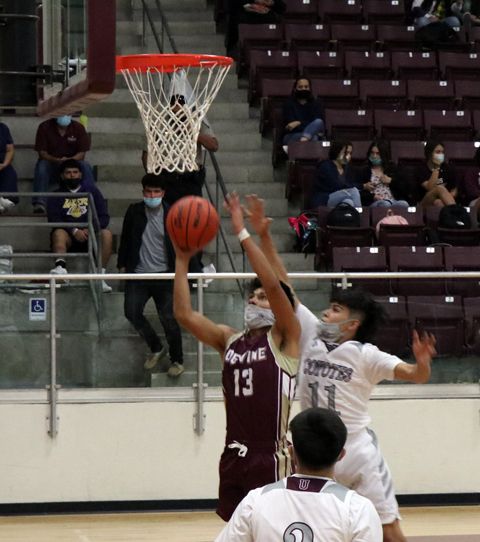 In their first week of basketball with a full team, the Warhorses fell to Uvalde and Stockdale and beat Ingram Moore. In these pre-district games, the Warhorses are focusing on getting into shape and learning their positions. They have a month before district starts on January 12th against Somerset. Making up the Varsity this season is Colin Dishman, Weston Byrd, Caden Hanson, Jaieden Burford, Mason Burford, Aiden Zapata, Matthew Madrid, Kaiveri Alvarez, Justin Contreras, Peyton Carr, and Zavier Contreras. Their game against Dilley was canceled due to Covid precautions.
Falling by just one point to Uvalde on November 17th, the Warhorses started off sluggish but gained the lead by the half at 18-16. Into the third, they maintained it but in the fourth quarter, the Wolves took control and advantage of the last few minutes and took the lead to win it by one point.
Points: Byrd 3, Hanson 9, M. Burford 13, Zapata 2, Madrid 4, J. Contreras 9, Carr 2. FTP 56%. Q1 6-12, Q2 18-16, Q3 30-23, Q4 42-43.
Saturday, the Warhorses faced Stockdale and with one ref calling tight 3 seconds and then letting them play a little rougher in the second half, the Warhorses still got into foul trouble. Tied at 23-23 at the half, Stockdale gained the lead at the very end and Devine lost the game at 51-57. They were able to run their plays and work on their offense. Every Warhorse worked hard and never gave up.
Points: Dishman 9, Hanson 12, M. Burford 5, Madrid 3, Alvarez 3, J. Contreras 17. Q1 14-13, Q2 23-23, Q3 40-39, Q4 51-57. FTP 51%.
On Monday, the Warhorses took on Ingram. The Warriors trailed the whole game and had several players in foul trouble early in the third quarter. Devine looked aggressive and constantly stole the ball when they were on defense. Dishman used his impressive vertical leap to earn rebound after rebound.
M. Burford was able to drive a powerful lay up in, made it, drew the foul and a technical was called against the Ingram coach. M. Burford made two of the three free throws. Then getting the ball back made a quick play to put the ball in the hands of Byrd, who made a three pointer and put the Warhorses up 56-33 in the third.
In the fourth, Ingram played with most of their team having four fouls, X. Contreras had several break away layups to keep adding to the Warhorses lead. They would finish the game strong and get their first win at 80-38. “Great effort by the Horses! Made a few more shots and rebounding was much improved. We won 80-38.” Coach Wells
Points: Dishman 13, Byrd 9, Hanson 11, J. Burford 3, M. Burford 15, Zapata 5, Madrid 7, Alvarez 5, J. Contreras 6, X. Contreras 6. Q1 15-14, Q2 35-28, Q3 60-35, Q4 80-28. FTP 66%.
In a lunch time game on Tuesday, the Warhorses faced off against Marion. The Warhorses were worn out from yesterdays win but took to the court and fought hard. They were down 9-20 at the end of the half and worked to keep Marion’s lead from growing. They finished the game 43-61 and are ready to take on their next game with renewed energy.
Points: Byrd 6, Hanson 3, J. Burford 2, M. Burford 12, Zapata 1, Madrid 5, Alvarez 2, J. Contreras 12.
The Warhorses are scheduled to play Stockdale against on Dec. 1, Pearsall Dec 4th, and in Natalia on Dec. 5th. The Varsity games are streamed on Jim Sessions YouTube page as well as past games are there. Tune in and check out the Warhorses as they work to win!
By Dicy Chambers
Sports Writer