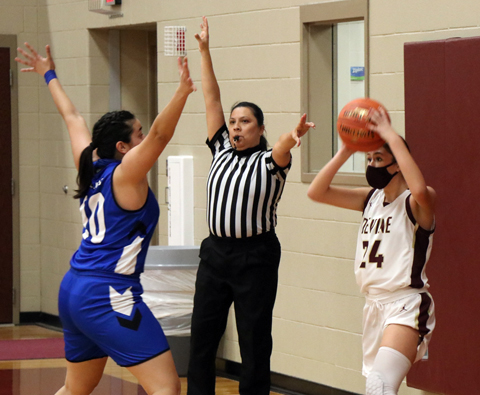 Now 4-0 for the season, the Arabians are making a great pre-district run and getting into top shape for district. Facing down Carrizo Springs, Rocksprings, and Del Rio, the Arabians played aggressively and ran their plays. All three games are available to watch on YouTube and future games will be streamed there.
We got a good, solid win vs Carrizo Springs. It was our first home game of the season and the girls were excited to take the court. Defensively, we were solid and able to put some pressure on the Carrizo Springs guards. We took advantage of creating several turnovers and got some easy transition points. We moved the ball well against their zone defense and got some good shots. We didn’t shoot the ball at a high percentage, but it’s still early in the season and that will come. I was really pleased with the second half intensity shown by the team.
Points: Lacey Shook 2, Kendall Marek 3, Yessika Garza 6, Megan Runyan 5, Kaydi Yeats 4, Madison Mata 18, Ally Taylor 14, Denise Contreras 3, Cece Martinez 2. Q1 10-5, Q2 22-9, Q3 41-14, Q4 57-29. FTP 50%.
The Del Rio game was another solid win for the Arabians! Intensity wise, we really set the tone early and played well throughout the game. Defensively I thought the girls did a good job pressuring Del Rio and then we did a good job of blocking out the bigger posts from Del Rio when the ball was shot. This led to some early offense for the girls. We played aggressively on both sides of the ball. We had a really good second quarter that took us to the half up 34-11. The ball moved well throughout the game and when that happens, we get good shots.
Points: Andrea Rios 2, Shook 7, Marek 1, Garza 3, Yeats 2, Mata 19, Taylor 11, Contreras 4. Q1 14-1, Q2 29-11, Q3 41-17, Q4 49-26. FTP 58%.
We got out to another fast start in the Rocksprings game. It was another game where we did well defensively. Our defense is getting better and the kids are gaining confidence in their ability every game. We still have lots to work on, but you can definitely see an improvement from game to game. Again, the ball moved well against the Rocksprings zone defenses and that allowed us some good looks at the basket.
Points: Shook 8, Marek 7, Garza 10, Yeats 7, Mata 9, Taylor 18.Q1 183-11, Q2 34-19, Q3 47-28, Q4 59-40. FTP 63%.
4-0 on the young season, with some really tough games coming up. Those games should be challenging but, ultimately, I think they have a chance to really help us improve going forward. I’m really looking forward to see what this team will be able to do this season!
The Arabians played La Vernia yesterday. They will face Navarro today at 10:00 am, Jourdanton Dec. 1 at 5:00 pm, and in Lytle Dec. 4th at 5:00 pm. The plan is to stream all of the games if possible. Please tune in and cheer on the team from the comfort of your homes!
Coach Jim Sessions