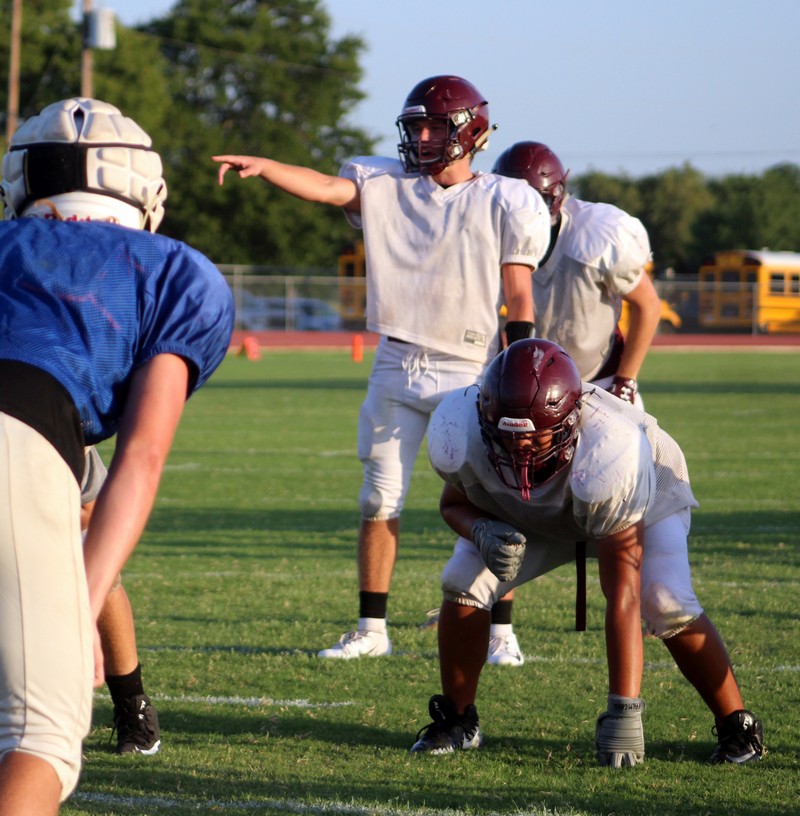 Speaking from experience, two-a-days can get monotonous going against the same person in practice repeatedly. The Devine Warhorses finally got to line up against an unfamiliar foe last Friday night at Warhorse Stadium as they hosted the Bandera Bulldogs in both team’s first scrimmage of the season. The Warhorses “won” the scrimmage by finding the end zone twice compared to the Bulldog’s lone score.
“It was good that our guys finally got to be challenged by someone other than who they have been constantly seeing over the last two weeks,” stated Head Coach Paul Gomez. “Players need the challenge of going against someone new and it gives the coaches a chance to truly evaluate what their players did right, and what needs to be improved.”
Devine’s first play of the game gave the offensive unit a spark right away. Quarterback Chad Lawson pitched the ball to running back Guido Zapata for a 25 yard gain. Lawson kept the pitch on the second play and took it to the house from 45 yards out. In the last sequence of the scrimmage, Lawson threw a quick hitch to Zapata on the far sideline. Zapata turned that catch into a 70-yard reception.
“We had some really positive things against Bandera,” Gomez continued.“I thought our kids played well and executed great at times. Obviously, there were some missed assignments and glaring mistakes but not many due to lack of effort. Our kids went out and played hard; right now that’s what we are looking for.”
Coach Speak
Guido Zapata contributed at both running back and inside receiver. He had a solid night offensively with two receptions, one for 70 yards and a TD, and gained many rushing yards. Donavon Camacho blocked well and had one reception for five yards. Isaiah Oropeza also did a good job blocking and had one reception for eight yards.—Receivers Coach Scott Taylor
Sophomore Aaron Rivera and senior Mason Perez played well. I am looking to see more improvement as the season goes.—Line Coach Devin Rotramel
Leonard Pompa and Sergio Martinez each had a tackle for loss. They will get better every week.—Linebacker Coach Evan Eads
Jayce Hackebeil did a good job blocking. He did not have any mistakes.—Tight End Coach Eads
Chad Lawson did a great job of running the offense and he made some big plays. We were able to get Guido Zapata the ball in space and he used his athletic ability to make some plays.—Offensive Backs Coach PJ Wells
At times, the moment got the best of us because we forgot to read our keys. We were out of position at times on coverage of routes but made up for it with effort. Guido had a heck of a night stopping two touchdown runs on hustle plays from across the field. Joey Seguin, Oropeza, and Camacho were involved in multiple plays. Overall, I am pleased with the effort but our unit just needs to clean up reads and footwork.—Secondary Coach Heath Poppe
Up next
All three levels will have their second and last scrimmage of the season Thursday evening at Navarro. The varsity should take the field a little after 7:00pm.
By Jerel Beaty
Staff Writer