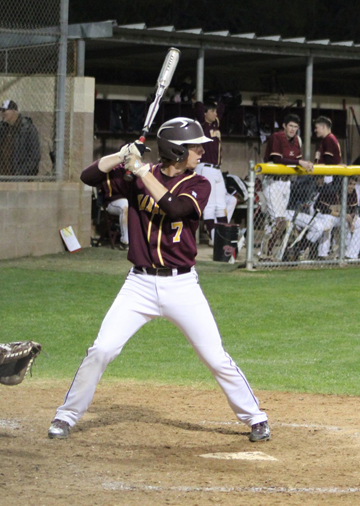 Devine Warhorses started the game strong only allowing the Wild Cats 1 run in the second inning and scoring 4 runs in the bottom of the inning. But Carrizo Springs was able to slowly catch up and take the lead by the sixth It came down to the bottom of the seventh inning when the Warhorses earned the run they needed to tie the game and force another inning. Then in the bottom of the eighth, after Carrizo Springs did not score in the top, the Warhorses found home a final time to win 7-6 in their first district game.
Bottom of the second, 1 out, Brady Harrell makes it to first after a pop fly and an error. Harrell then steals second with Truett Barron at bat. Barron reached first and Harrell scores after an error by the first baseman. Ralph Rios hit a grounder, Blaine Miller hits another ground ball, and Isaiah Oropeza walked loading the bases. Joseph Guajardo walked and forced Rios home. Dalton Kramer hit a double to left and Miller and Oropeza score. Devine 4 Carrizo Springs 1. Bottom of the fourth, with Miller on third, Guajardo ground out for the second out and Miller scored the only Warhorse run of the inning.
Bottom of the seventh Devine down 5-6, with Kramer and Newt Crouch on base, Contreras is at bat, Kramer scored the tying run on a wild pitch. Bottom of the eighth, 2 outs, and Rios on third, Guajardo on second, Kramer is hit by a pitch to load the bases. Crouch hits a single to left and Rios scores the winning run. Devine wins 7-6.
Oropeza 1 run, Guajardo 1 hit, 2 RBIs. Kramer 1 run, 1 hit, 2 RBIs. Crouch 1 hit, 1 RBI. Harrell 1 run, 1 hit. Rios 2 runs. Miller 2 runs, 1 hit. Pitching for Devine was Crouch with 28 strikes in 36 pitches, Gehrig Runyan 23 strikes in 42 pitches, Kramer 25 strikes in 42 pitches and Barron 13 strikes in 31 pitches.
By Dicy Chambers
Sports Writer