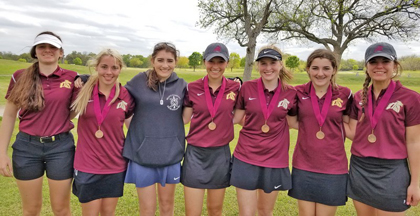 The senior-laden Devine Arabian golf team played their best round over the last three seasons last Tuesday at the Uvalde Invitational. A three-year best 370 had the Arabians finishing in 3rd place out of 16 teams, with many of those being from much bigger school districts.
Kayla Busby shot a season-low 84 to finish fourth in a field of 92 total competitors. If not for an incorrect ruling on hole number seven which led to an ‘8’ being recorded on that hole, it allowed for a hint of frustration to set in with the ruling. Without that, there is a great chance Kayla would have beaten the eventual champion Aleman Leezandra from Laredo United who shot a 79.
Kayla had an outstanding tournament minus holes number seven and seventeen. She recorded an 8 on each hole, which she is more than capable of birdying each a majority of the time. For people who have played golf before, it is a crazy, mind-boggling sport at times.
Kayla was rolling along just great through six holes of play then had a little hiccup that in my opinion cost her about four to five strokes over the next three or so holes after the incorrect ruling. Add in a number 17 tee shot out of bounds, which she rarely does by the way, and it adds six to eight shots to her final score.
Kayla was phenomenal on 16 of 18 and I believe that she will not have those ‘hiccups’ during district or regional play.
“Pre-district in Uvalde was definitely a great opportunity for not only me but also my team,” stated Kayla. “We go to get a feel of the course before district and hopefully this will help lead us to a championship.”
Shelby Spivey played her best round of golf that I was somewhat witness to. She played really, really well when I was out with another group of players so she ‘encouraged’ me to stay away which I was more than willing do. Anything to help…
Shelby played the course once during Spring Break, which no doubt helped her achieve her best score. She was also under the weather the day before so she had some obstacles to overcome. Her confidence level is high going into district, which it should be.
“After playing in our last pre-district tournament, I am excited to see the outcome of our district tournament,” Shelby stated regarding the last pre-tournament location also being the site of the district tournament. “I shot my personal best and along with the rest of my teammates were able to achieve our lowest score of the season.”
Preslee Quisenberry also shot her low score for the season. Her 94 was inflated a little due to a couple of rough patches throughout the tournament. She is a heck of a competitor in every sport or competition she is a part.
Preslee, recently named to the All-Region basketball team, hopefully adds another regional appearance in golf to her long resume of accomplishments.
Lillie Weyel shot a 106 to finish in the top third of the tournament field. She has played the course several times now over the course of two seasons and has a great shot of shooting closer to one-hundred or below during district play.
Paige Williamson shot a 114 to hold on to the 5th team spot going into district. She quietly goes about her business and plays really well in stretches. Paige is involved in several activities at DHS but puts in her time practicing golf because it is something she enjoys doing and wants to get better.
Sierra Pompa continues to improve each time she steps on the practice field or participates in a tournament. Her 115 is a good score for the course difficulties that Uvalde presents. Sierra is another great competitor and she is not satisfied with a 115. Golf is a tough sport and I don’t think she realizes how much improvement she has made in such a short amount of time.
Sidney Weyel took up golf just a little over a month ago and has really knocked strokes off her game. She knows which clubs to use and which ones to leave in her bag, which even some experienced golfers are not able to force themselves to do. She is eager to improve and will spend time between the conclusion of this year and the beginning of next to become one of our better players.
Team results: 1st-Laredo United-338, 2nd-Pleasanton-370, 3rd-Devine-380, 4th-CC Winn-398, 5th-Health Careers-407, 6th-Laredo Alexander-413, 7th-Utopia-431, 8th-Laredo Nixon-448,, 9th-Knippa-450, 10th-Uvalde-451, 11th-Carrizo Springs-462, 12th-Hondo-464, 13th-San Antonio Memorial-469, 14th-Dilley-480, 15th-Medina-496, 16th-Crystal City-499.
Individual top 10: 1st-Leeandra Aleman-Laredo United-79, 2nd-Elyssa Esparza-Laredo United-82, 3rd-America Ginithan-Health Careers-83, 4th-Lacey Stevens-Pleasanton-83, 5th-Kayla Busby-Devine-84, 6th-Laken McAda-Pleasanton-85, 7th-Mariana Portillo-Laredo United-87, 7th-Mallory Matthews-Hondo-87, 9th-Alex Romero-Laredo United-90, 10th-Victoria Davis-Knippa-93.
Arabians (out of 92): 5th-Busby-84, 13th-Shelby Spivey-94, 16th-Preslee Quisenberry-96, 28th-Lillie Weyel-106, 46th-Paige Williamson-114, 48th-Sierra Pompa-115, 53rd-Sidney Weyel-116.
By Jerel Beaty
Staff Writer