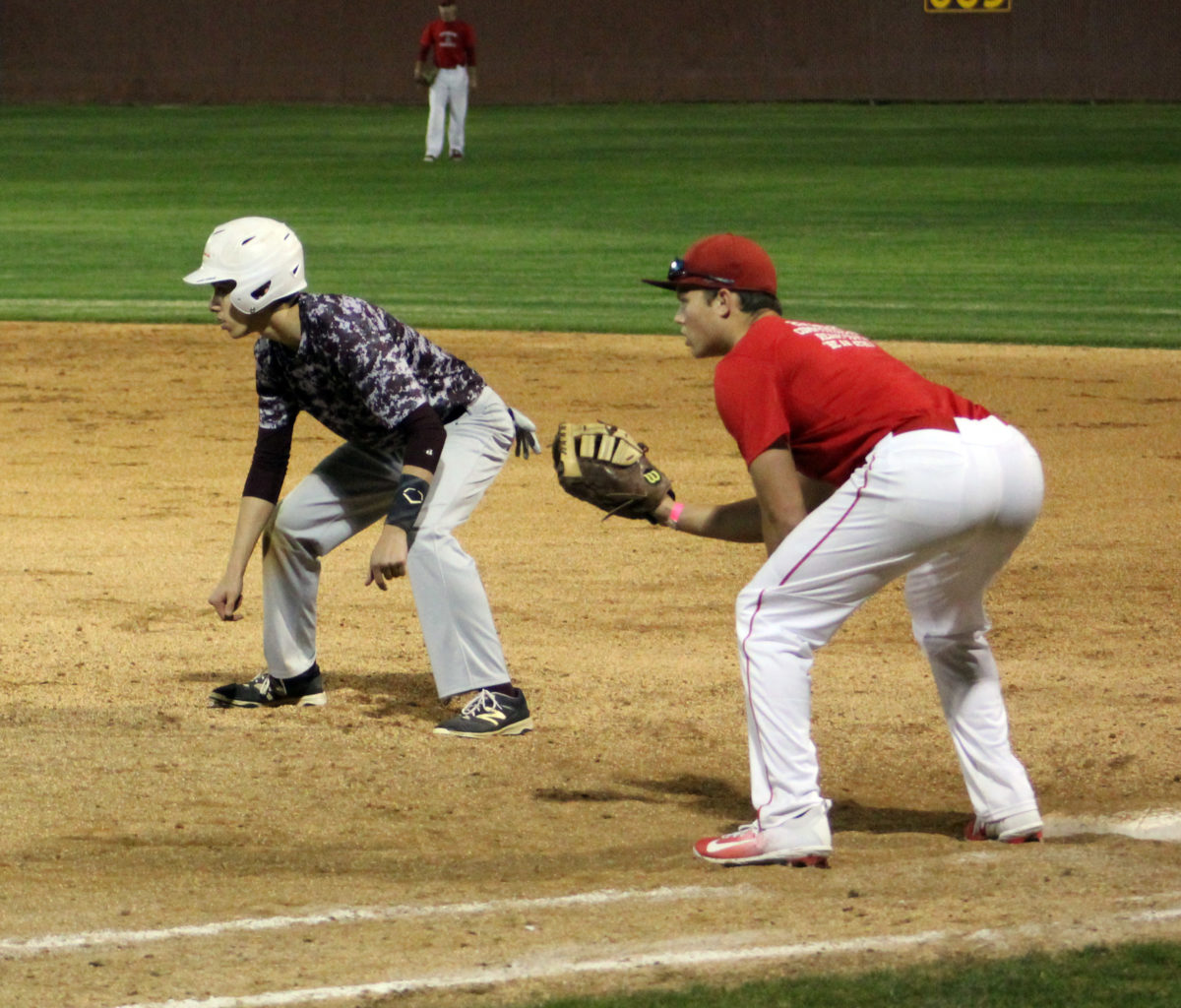 The Varsity Warhorses wrapped up pre-season play last week with scrimmages against Pleasanton and SA Kennedy.
Pleasanton
Devine hosted Pleasanton last Wednesday, Feb. 15, and came from behind in the bottom of the 7th inning to tie the scrimmage 8-8.
The Eagles scored the first eight runs of the game, scoring twice in each of the first four innings.
Devine didn’t get on the board until the bottom of the 6th inning, where they scored four times to cut Pleasanton’s lead in half.
After a fly out by the inning’s leadoff batter, Dalton Kramer and Dillon Ricord drew back-to-back walks, and Newt Crouch singled to load the bases. Jack Zimmerle reached base safely after an error by the Eagles’ first baseman that also allowed Kramer to score.
Richie Long’s double knocked in Ricord and Crouch for two more runs, and Zimmerle stole home later in the inning to cut Pleasanton’s lead to 8-4.
Corben Boggs stepped onto the mound in relief of pitcher Kyler Brown in the top of the 7th inning and set the Eagles down in order to set up the rest of Devine’s comeback.
Brown and Isiah Oropeza reached on consecutive errors to lead off the inning, and Chad Lawson drew a walk to load the bases with no outs. Jerrod Taylor singled to right to drive in Brown before being replaced by speedy pinch runner Brady Harrell.
After a pop-out to first, Kramer hit a ground ball that drew an error from the Eagles’ shortstop. Oropeza, Lawson, and Harrell all scored to tie the scrimmage at 8-8.
Batting: Ricord 0-2, 1 BB; Crouch 2-2, 1 BB, Kramer 0-1, 1 BB, 3 RBI; Zimmerle 0-3, 1 RBI; Long 1-2, 1 BB, 2 RBI; Boggs 0-2, 1 BB; Matt Ornelas 1-3; Brown 0-2; Oropeza 0-2, 1 BB; Lawson 0-1, 2 BB; Taylor 1-3, 1 RBI; Harrell, 1-1; Ralph Rios 0-3; Tristin Cruz 0-1.
Pitching: Ricord 3 IP, 2 ER, 2 hits, 3 walks, 5 strikeouts; Crouch 2 IP, 1 ER, 3 hits, 2 walks, 2 strikeouts; Brown 2 IP, 3 walks, 4 strikeouts; Boggs 1 IP, 2 strikeouts.
SA Kennedy
The Warhorses had a much easier time of it against Kennedy on Friday, Feb. 17, blowing out the Rockets 28-6 in five innings.
Both teams scored three runs in the 1st inning. Leadoff man Ricord drew a walk in the bottom of the 1st, then stole second and took third on an error. Crouch walked and stole second, and Zimmerle reached first on an error by Kennedy’s shortstop that also allowed Ricord to cross the plate for Devine’s first run of the game. Crouch scored on a passed ball, and Boggs hit a triple to center to drive in Zimmerle to tie the game 3-3.
After holding Kennedy scoreless in the top of the 2nd inning, the Warhorses took a 4-3 lead after Kramer reached on an error and scored on Oropeza’s bunt.
Kennedy’s last lead of the game came in the top of the 3rd inning, when they pushed across two runs to go up 5-4.
Devine scored three more times in the bottom of the 3rd inning. Long led off with a walk, and Boggs singled before being replaced by pinch runner Cruz. Kramer reached on a one-out bunt to load the bases, and Isaac Solis and Oropeza drew back-to-back walks to force in Long and Cruz. Ricord drove in Kramer on a single to third, and Oropeza later scored on a passed ball to put the Warhorses up 8-5.
The Rockets scratched back one run in the top of the 4th inning thanks to an error, a passed ball, and a single, then proceeded to implode in the bottom of the inning, giving up a whopping 20 runs to Warhorses, who batted around twice. The runs came thanks to a stolen base by Boggs, a walk by Ricord, a double by Zimmerle, a single by Ornelas, an error, singles by Oropeza and Crouch, a walk by Long, a single by Boggs, a double by Ornelas, a single by Kramer, and a single by Ricord.
Kennedy then went down in order in the top of the 5th inning before the game was called.
Batting: Ricord 2-3, 3 BB, 3 RBI; Crouch 1-5, 1 BB, 2 RBI; Zimmerle 2-5, 3 RBI; Long 0-2, 3 BB, 1 RBI; Boggs 4-5, 3 RBI; Ornelas 3-5, 4 RBI; Kramer 1-3, 1 BB, 2 RBI; Solis 1-3, 2 BB, 2 RBI; Oropeza 1-2, 1 BB, 3 RBI.
Pitching: Ricord 2 IP, 1 ER, 3 hits, 2 walks, 3 strikeouts; Solis 2 IP, 2 hits, 6 strikeouts; Kramer 1 IP, 1 strikeout.
The Warhorses will be in action in the Marion Tournament beginning Thursday, Feb. 23, through Saturday, Feb. 25. They are scheduled to face Luling, Navarro, Cameron Yoe, and Lago Vista.