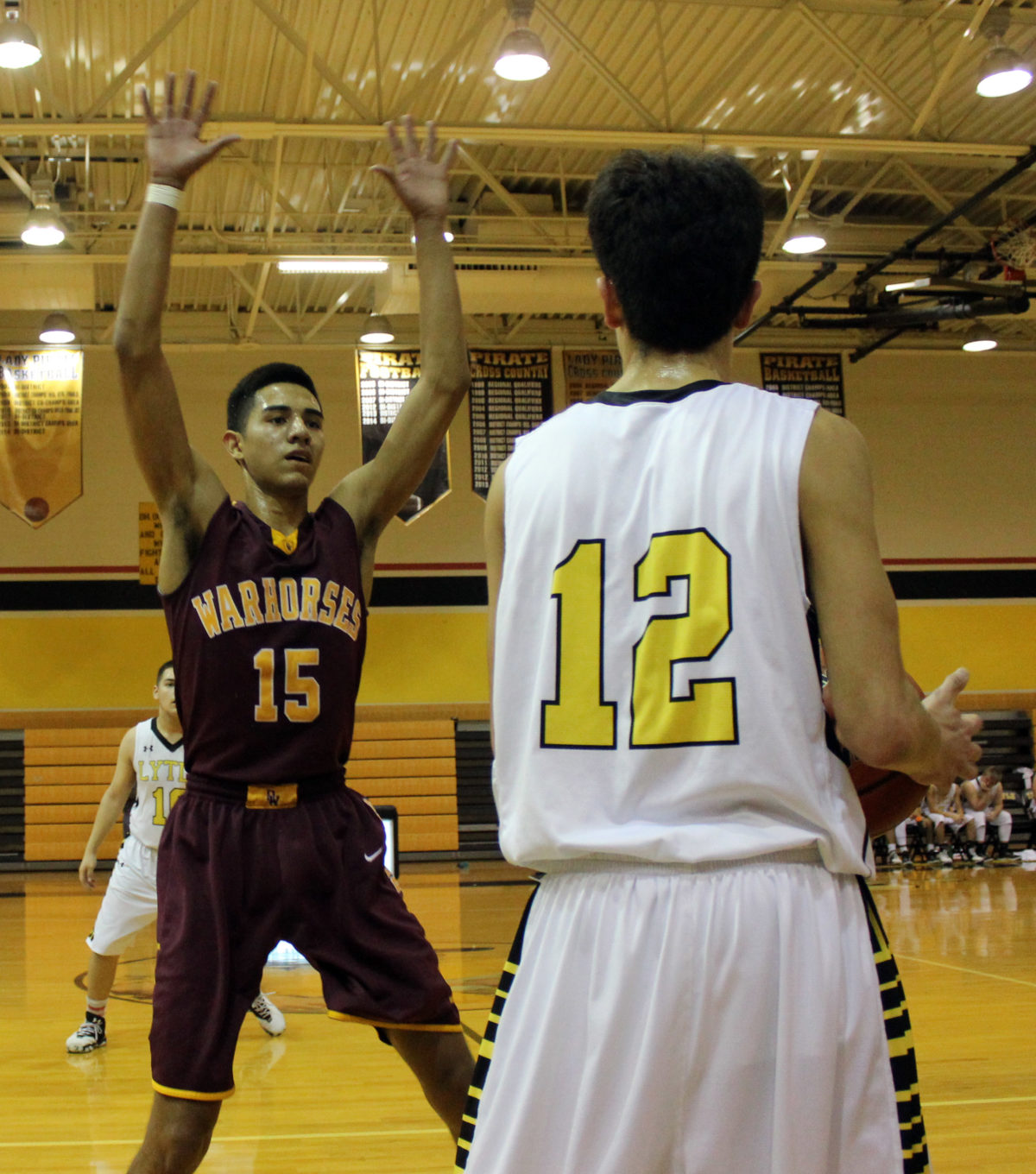 The Devine Warhorses didn’t jam to any music on the bus trip back from Carrizo Springs last Tuesday night, but if they had, Michael Jackson’s Thriller would have been a fitting tune to play. Connor Schmidt took an Angelo Gonzales inbounds pass under the Warhorse basket and finished a left-handed layup as he was fouled to put Devine up 61 to 60 with 2.5 seconds left on the 2nd overtime game clock. Schmidt missed the free throw and Carrizo’s desperation ¾ court heave wasn’t close as time ran out.
This see-saw battle had each team taking leads at different points in the 4th quarter and throughout each of the overtimes before the team that was fortunate enough to have the last shot to win, which was the Warhorses, won the game. To begin the final play, Schmidt, who was stationed on the near block by the inbounding Gonzales, went up to set a screen at the elbow before curling back down to the far block where he received the bounce pass to complete the game-winning shot.
“We finally persevered in a tight ballgame.We’ve had some close games and haven’t been able to pull some of them out at the end but tonight, we kept fighting and it paid off. I couldn’t be more proud of the effort and our willingness to not give it or to not give up,” stated Head Coach PJ Wells.
Devine led after the first quarter, 12 to 10, but Carrizo Springs came back to take a slim 26 to 24 lead at the break and a 35 to 34 lead into the fourth quarter. The score alternated often from that point onward was tied at 50 going into the first OT and tied at 57 going into the 2nd OT.
Devine’s victory coupled with Pearsall’s loss to Crystal City set up the playoff seeding game for 2nd place with the Mavericks that was played in Lytle last Friday night.
If neither team looked very winded even at the end of the 2nd overtime, some of the freshness the players had left was probably due to the fact that they got a lot of rest during the game as both teams combined to shoot 55 free throws, 44 for Devine alone due to the Wildcat’s 33 team fouls. The Warhorses made 21 of those attempts for 48%. Carrizo Springs made 7 of their 11 free throw opportunities for 64%.
Devine shot 19 of 43 from the floor for 44% and hit 1 of 5 3-pointers for 20%. Devine had 20 offensive rebounds which they converted into 15 second chance points.
It was a complete team win but the man-of-the-hour wound up beingConnor Schmidt who finished with 14 points, 13 rebounds, 1 steal, and 1 blocked shot. Jacob Oyola led the team in scoring with 16 points and he also had 5 rebounds, 3 assists, and 2 steals. Daniel Ramirez had 14 points, 9 rebounds, and 1 assist while Angelo Gonzales had double figures as well with 10 points, 4 rebounds, 4 assists, 2 steals, and 1 blocked shot. Others: Darren Morales 4 points, 1 rebound, 1 blocked shot; Quentin Zapata 1 point, 2 rebounds; Zaarion Jackson 1 rebound, 1 steal, 1 assist; Hunter Murphy 2 rebounds.