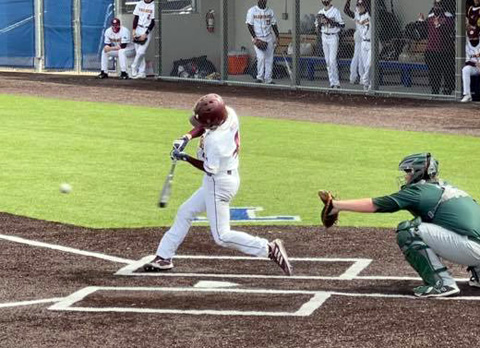 In the Somerset tournament, the Warhorses went 0-4 but were able to face tough teams and work on their game. Facing Edison, Boerne twice, and Luling, the Warhorses earned 12 hits, 9 runs, 12 stolen bases, and 194 strikes.
In their opening game against Edison, Devine opened with a run in the first when Camden White stole home. Devine would allow Edison 5 runs in the second and 1 run in the third before Devine would earn 3 runs in the top of the fourth. Michael Alers walked, Sage Cruz in for Alers, Mason Burford walked, 2 outs, Xsavior Martinez hit a ground ball to the pitcher and Cruz scored. Roger Gutierrez hit a single to shortstop and Burford makes it home, 3-6. Jacob Barron singled and then Martinez scored on an error, 4-6.
White 1 run, 3 steals. Gabriel Esquibel 1 single. Martinez 1 single, 1 run, 1 steal. Cruz 1 run, Gutierrez 3 singles, 1 RBI. Burford 1 run. Hadyn Brumage1 single. Jacob Barron 1 single. Colin Dishman 43 pitches with 21 strikes. Caden Hanson 46 pitches with 23 strikes.
In their first game against Boerne, the Warhorses had some great plays at home but it was not enough to earn the win. They fell 3-8. Their three runs came in the top of the third when White, Martinez, and Barron all walked. White stole home and then Gutierrez singled to allow Martinez to score. With Gerlach on the plate, Barron stole home for Devine’s third run.
White 1 single, 1 run, 2 steals. Martinez 1 run, 2 steals. Roger Gutierrez 1 single, 1 RBI. Barron 1 single, 1 run, 1 steal. Gabriel Esquibel 1 steal. Dishman 3 pitches with 3 strikes. Samuel Mills 40 pitches with 16 strikes. Korbin Campbell 43 pitches with 14 strikes. Logan Camarillo 6 pitches with 3 strikes.
The Warhorses 2nd game against Boerne ended 0-11. Boerne had a tough pitcher that the Warhorses could not get a hit on. Ramirez 70 pitches with 38 strikes. Evan Priest 31 pitches with 14 strikes.
Luling earned the first run but Devine took the lead back in the bottom of the third at 2-1. It was not until the 5th that Luling was able to score again and win the game 7-2. White doubled after one ball to get on base in the bottom of the third. 1 out, Barron grounds into short and with Ramirez in for Barron, Ramirez steals second. White scored on a error by the 2nd baseman and Ramirez moves to 3rd. Gutierrez grounds out but Ramirez makes it home and the score 2-1.
White 1 double, 1 run. Ramirez 1 run, 1 steal. Barron 1 single. Alers 22 pitches with 1 strike. Barron 87 pitches with 53 strikes.
The Devine Slugfest starts this Thursday with Devine playing Bandera at 9:00 am. They play Winn at 11:15 am on Thursday, Saint Mary’s Hall 9:00 am Friday, and Brackenridge at 6:00 pm Friday. Next week they will compete in the Bandera Tournament.
By Dicy Chambers
Sports Writer