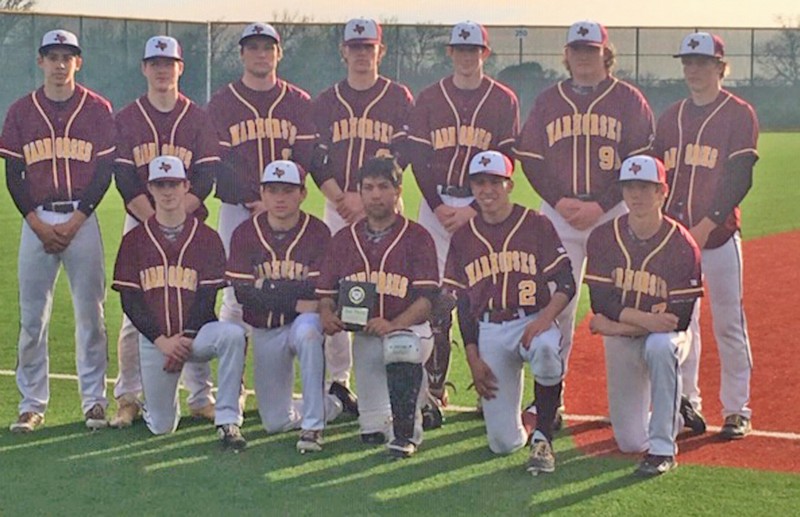 At the Marion 3rd Annual Bulldog Classic, the Warhorses beat La Vernia, C.H. Yoe, and Lago Vista to play against Canyon Lake in the Championship game. The Warhorse pitchers had a great tournament with 59% of their 343 total pitches being strikes. The Warhorses would earn second place after losing the championship game 3-4.
Friday started with a close 7-6 win over La Vernia. Devine went in to the fourth quarter down 1-3 and with 2 outs and bases loaded Brady Harrell scored after an error by the third baseman. Isaiah Oropeza loaded up the bases again with a walk. Ralph Rico walked and Gehrig Runyan was forced home for another run to tie the score at 3-3. La Vernia changed their pitcher but he walked Newt Crouch and brought home Blaine Miller. Truett Barron is also walked to bring home Oropeza. Another pitcher change and Chad Lawson singles while Rios and Crouch score and bring Devine up 7-3. La Vernia added 3 runs in the bottom of the inning but it was not enough and Devine won their first game of the tournament.
Oropeza 1 run, 1 walk. Rios 1 run, 1 RBI, 1 walk. Crouch 1 run, 1 RBI, 1 walk. T. Barron 1 RBI, 1 walk. Chad Lawson 1 run, 2 hits, 2 RBIs, Brady Harrell 1 run. Gehrig Runyan 1 run, 1 hit. Joseph Guajardo 1 walk. Miller 1 run, 1 hit, 1 RBI, 1 walk. Pitching: T. Barron 48 total pitches, 1 strike out, 3 hits allowed. Priest 29 pitches, 1 strike out, 1 hit allowed. Mando Gutierrez 7 pitches.
In the game against C.H. Yoe from Cameron, TX, the Warhorses won 7-3 with Oropeza on the mound for four innings throwing 72 pitches with 39 strikes and only allowing 3 hits. Runyan would pitch the last inning throwing 11 pitches with 7 strikes. Devine and Yoe each scored 1 run in the first inning and none in the second. Devine broke that pattern when they earned 2 runs in the third, 3 in the fourth, and 1 in the fifth to end the game 7-3.
Oropeza 3 runs, 3 hits, 3 RBIs. Lawson 1 run, 1 hit, 1 RBI. Crouch 1 run, 2 hits. T. Barron 1 hit. 1 RBI. Harrell 1 hit. Jacob Barron 1 hit, 1 RBI. Guajardo 1 run. Miller 1 run. 1 hit.
In their final game on Friday against Lago Vista, pitcher Truett Barron threw 54 strikes in 88 pitches and only allowed 5 hits and 2 runs in the 8-2 victory. Devine earned 1 run in every inning except the second where they earned 4 runs. Lago Vista was only able to score in the second and fourth innings.
Oropeza 2 runs, 3 hits. Lawson 2 runs, 1 hit, 2 walks. Crouch 1 run, 1 RBI. T. Barron 2 hits, 3 RBIs. Harrell 2 hits, 1 RBI. Runyan 1 run, 1 hit, 1 walk. Rios 1 walk. Guajardo 1 run. Miller 1 run.
In the championship game against Canyon Lake, “the Warhorses pitching staff was awesome. Unfortunately, we couldn’t string some timely hits with runners on in this game,” said Coach George Villa. Pitching for Devine was Gehrig Runyan and Dalton Kramer. Runyan threw 37 strikes in 56 pitches and Kramer threw 20 strikes in 28 pitches.
Neither team scored until the top of the fourth quarter when Devine scored 2 runs and Canyon Lake answered with 1 run in the fourth and 1 run in the fifth. Devine would score one more run in the sixth but Canyon Lake was able to get their winning runs deep in the seventh inning to win the game.
Oropeza 1 hit, 1 walk. Lawson 1 walk. Crouch 1 run, 2 hits. Harrell 1 run, 1 hit, 1 RBI. Runyan 1 run, 1 hit. Rios 1 walk.
“The reason we were able to win three out of the four games was our pitching. Our staff really improved and stepped up in this tournament. We threw lots of strikes and made our opponents earn their way on base. The second thing was our hitting. We had some great timely hitting in our first three ball games with some great bunting to move runners in to scoring position. I’m still very proud with the way we competed and came together as a team this weekend. It is definitely a good start to our season. We are still improving in various aspects of the game,” stated Coach Villa.
The Warhorses will host the Cross the Creek Classic this weekend followed by a rematch with Canyon Lake Tuesday, March 4th and then the Bandera Tournament March 7-9.
By Dicy Chambers
Sports Writer